Police say they are "appalled" by the behaviour by anti-mandate protesters in Wellington that have seen three officers hospitalised after being sprayed with a "stinging substance".

It follows an early morning operation today that saw a protester arrested for allegedly driving a car into a crowd, as police moved in on the occupation outside Parliament.

The protest against Covid-19 protection measures is now in its 15th day.

Police Assistant Commissioner Richard Chambers today described the protesters' actions as "disgraceful" and police were looking into how the protest was being funded.

Police said three officers were taken to hospital for a medical assessment after being sprayed with a stinging substance yet to be determined, but all are doing well. The New Zealand Herald said it was believed to be acid.

Yesterday human waste was thrown at officers, and police today said officers had shields in order to protect themselves from objects thrown.

"Following yesterday’s traffic management operation to install the barriers, police were made aware of protesters' plans to again throw human waste at officers. Shields were only deployed this morning after protesters had thrown objects at staff.

"Other officers were fortunate to escape injury after a person deliberately drove the wrong way down Molesworth Street and stopped just short of colliding with them," police said. 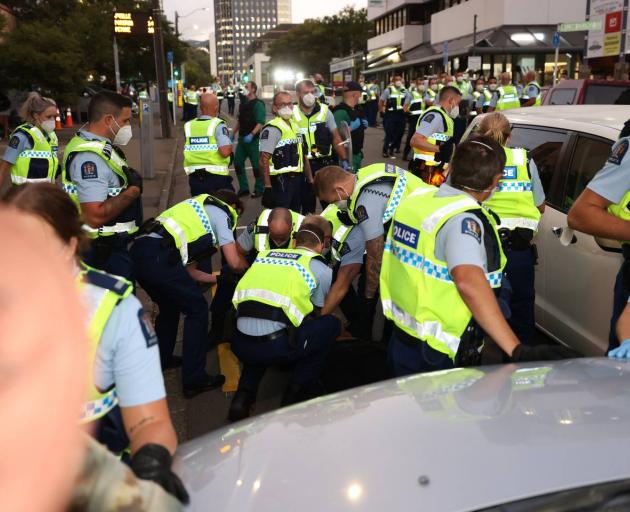 A white car was driven into the crowd as police armed with riot gear move in on the protest this morning. Photo: George Heard/NZ Herald
Police yesterday established a hard perimeter of concrete blocks around key areas of the protest and made eight arrests, saying "genuine protesters are no longer in control of the behaviour" at the precinct.

There were tense scenes again as hundreds of police, some armed with riot shields, stationed themselves around protesters in an attempt to reduce the perimeter of the protest in the capital.

A man on a loud speaker asked the crowd to calm down and a woman could be heard yelling that there are children there.

"Police do not wish to interfere with lawful protest, but the behaviours we are seeing are unlawful and will result in enforcement action," police said today.

About 250 staff were involved in the operation to further reduce the perimeter. 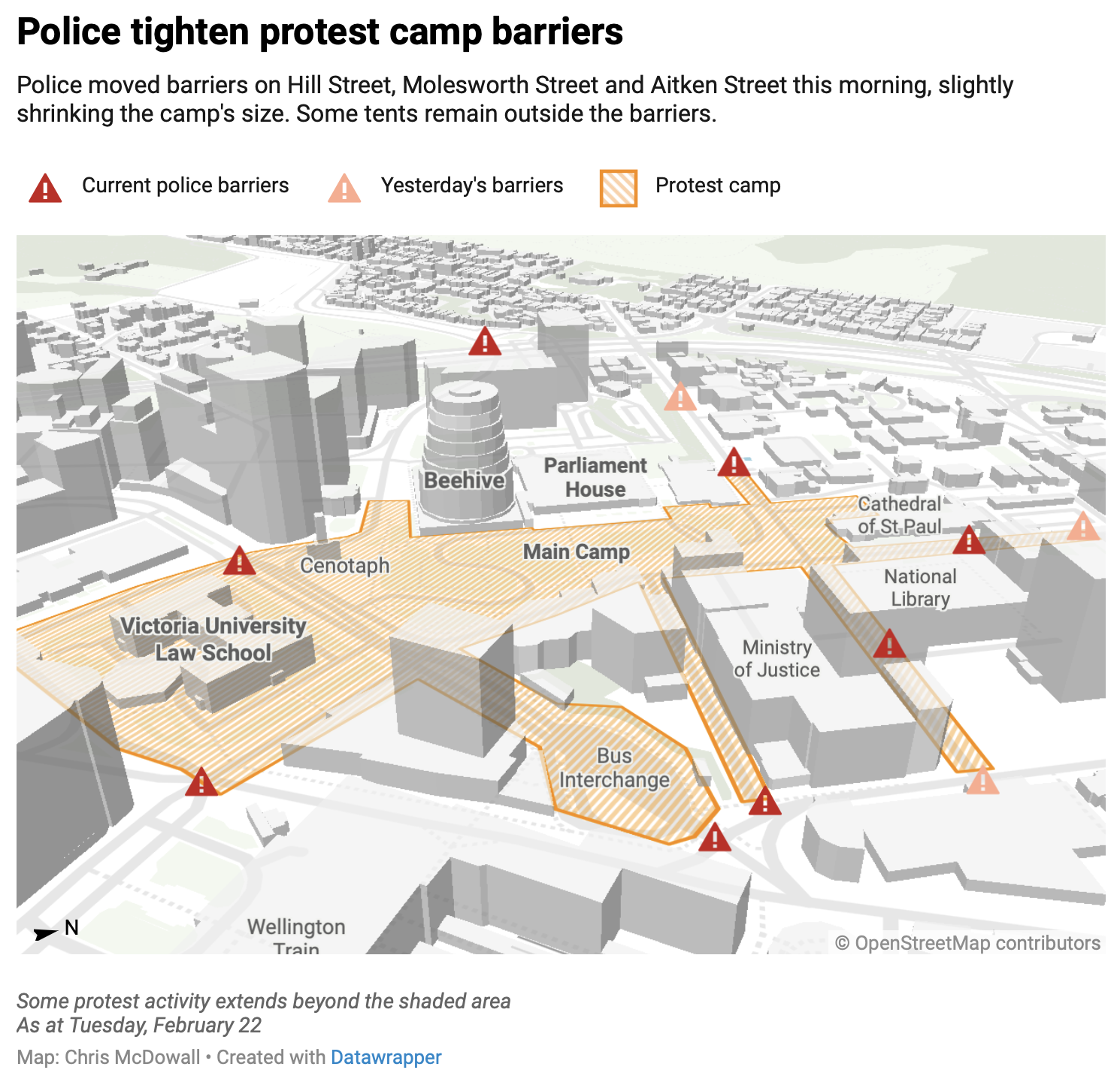 "This work is part of our ongoing efforts to reduce the impact of the protest on Wellingtonians, particularly those who live, work and study in the area around Parliament," police said.

"Staff secured locations at Aitken, Molesworth and Hill streets to allow forklift vehicles to move the concrete blocks.  The bollard line on Aitken Street and Hill Street was moved in about 50 metres, and about 100 metres on Molesworth Street."

Officers would continue to be highly visible in and around the protest area.

Protesters at the front line hurled abuse at media on the balcony at Parliament this morning, with some saying they hoped media will be executed, RNZ reported.

Our reporters were on the ground during the scuffle between anti-vaccine mandate protesters and police on Hill Street and Molesworth Street earlier this morning.

Here is what they saw. pic.twitter.com/jbmCbPUYNO

Former prime minister Jim Bolger says political leaders should "get off their high horses" and meet with those occupying Parliament's lawn.

But Deputy Prime Minister Grant Robertson says the protesters have made their point and need to leave the grounds.

He told RNZ's Morning Report programme today that politicians would not talk to protesters at the illegal protest amidst escalating tensions and disagreed with Bolger's suggestion that MPs should meet with genuine protesters to de-escalate the situation. 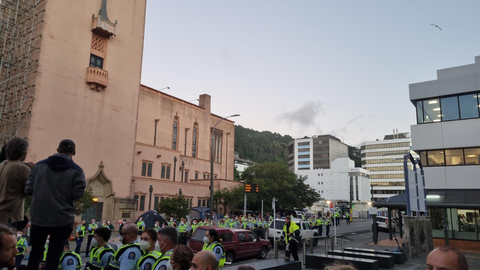 Police gathered around the Parliament precinct this morning. credit: RNZ

Sewage dumped, no swimming in harbour

Further to iwi concerns about protesters dumping sewage down drains, Wellington Regional Council says it's likely that has been happening for some time.

People are being told not to swim near Shed 6 and the Taranaki Street dive platform as the council investigates.

Council chairman Daran Ponter said the fact it had been picked up in the council's sampling indicated it was not new behaviour. He said it was abhorrent and had serious environmental impacts.

A Wellington iwi says it is appalled by what it calls the desecration of its whenua and moana by some protesters.

Taranaki Whānui said it has a sacred role as kaitiaki or guardian of its ancestral lands and the waterways at the harbour and said the behaviour was culturally offensive and a public health risk.

Spokesperson Kara Puketapu-Dentice said there have been threats against their kuia and kaumatua and vandalism of their offices and buildings in the city.