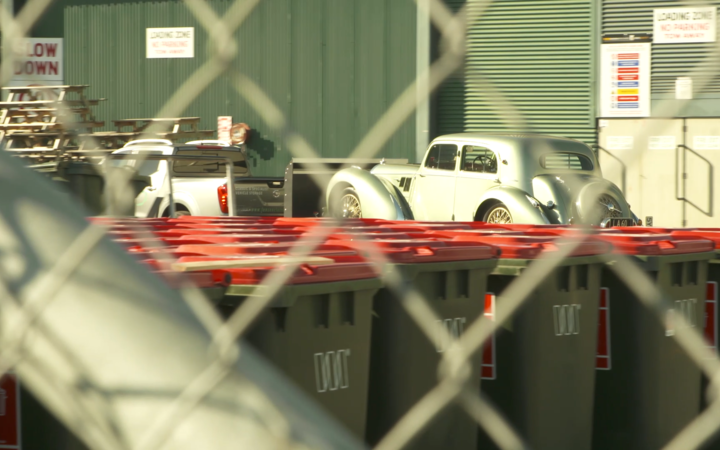 Classic cars being removed from ASB Showgrounds after its sudden liquidation announcement. Photo: RNZ
More than 40 classic cars up for auction have had to roll out to a new home after the auction venue suddenly closed this week.

Auckland's ASB Showgrounds, one of the country's biggest event venues, abruptly went into liquidation after a dispute with the landlord this week.

Staff from Webb's Auction House could scarcely believe it when their sales pitch to prospective car buyers was interrupted on Tuesday night by liquidators who ordered everybody out. The auction was scheduled for Sunday, June 27.

"We had the liquidator walk in and just pretty much shut us down, just caught us all by surprise," Caolan McAleer, head of collectors' cars, motorcycles and automobilia at Webb's, told Morning Report.

McAleer said there was "no warning at all" from the venue.

"Such disbelief, after we had spent weeks and months planning this event.

"We'd been packing it in since Saturday, to be told that we had to get it all out, including 44 cars, which you can imagine, was a bit of a logistical feat in itself."

Secure facilities have had to be found for many of the vehicles, while others were returned to the owners.

"The majority of the local owners have come and picked them up and are very understanding."

The car auction includes "a really diverse selection, something for every taste and budget," ranging from Peugeots going for $1000 right up to an Aston Martin with an estimated value of $500,000.

The 1998 Aston Martin is "one of only 81 made in that spec and we think, maybe the only one in New Zealand."

"There's the money and the buyers in New Zealand" for these kinds of vehicles, McAleer said.

Webb's is hunting for a new venue and hopes to announce a rescheduled auction soon, but the frustration remains over how little time they were given to clear out.

"We of course pleaded and asked, but they were completely unrelenting and wouldn't let us do it whatsoever."

McAleer said Webb's had events booked at the showgrounds up until the end of 2022.