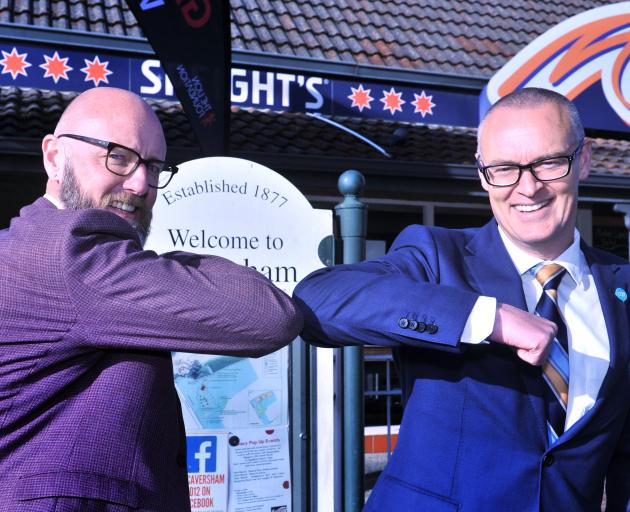 Dunedin MP Dr David Clark (right), then the health minister, celebrates the opening of a Covid-19 testing centre in Caversham with WellSouth chief executive Andrew Swanson-Dobbs in March last year. Now, after more than a year of the pandemic, Dr Clark is minister for the digital economy and communications and is dealing with issues such as how vaccine passports will work in the ‘‘digital identity ecosystem’’. PHOTO: CHRISTINE O’CONNOR
It turns out, according to a recently released Cabinet paper, that every one has the right to participate in the ‘‘digital identity ecosystem’’.

Which is nice and reassuring, although odds on many of us had no idea that such a thing existed, let alone that we were allowed to take part in it.

All is revealed in the Digital Identity Services Trust Framework Bill, the first reading of which Dunedin Labour MP and Digital Economy Minister Dr David Clark is scheduled to lead off in Parliament next week.

Weighing in at 60 pages of highly technical information it is unlikely to become a bestseller, but for all that the Bill is likely to have more immediate impact on us all than one might have imagined.

That would be because the Government is in the midst of setting up a vaccine passport system, whereby those with their two Pfizer shots on board will be able to access mass gatherings and those who have not hopped aboard the double jab train will not.

A key component to setting up such a passport is for there to be proof of exactly who you are, so national health records can be scanned and your vaccination status updated.

Which is where your digital identity and its associated ecosystem comes in.

As things stand, the main way which you can claim that you are indeed you, should an official website ask that question, is through the Government- provided RealMe service.

This will be familiar to anyone who has, for example, interacted online with the Ministry of Social Develop ment, who has taken out a student loan, renewed a passport or had dealings with the Inland Revenue Department. 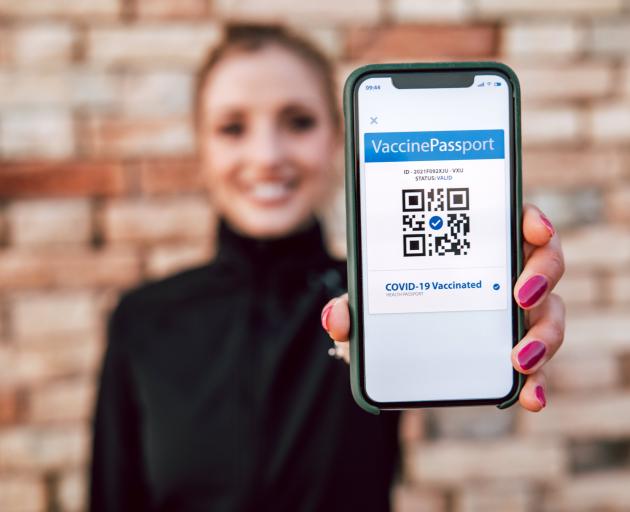 A young woman showing a Covid-19 mobile vaccination passport app. PHOTO: GETTY IMAGES
Sign in through RealMe and the site will accept you really are who you say you are and you can proceed with your business.

It is simple and effective, but by no means problem-free — questions have arisen about security of information and privacy concerns, and they will arise again as RealMe becomes the key to obtaining a vaccination passport.

The efficiency of the service was also called into question last week when it overloaded within hours of the Government announcing the launch of a vaccination certification trial.

Government departments are not the only organisations which use RealMe —  several banks do, whose customers were not best pleased at this disruption to their service.

But back to the Digital Identity Services Bill, legislation which began its life before the Covid-19 pandemic and which was intended as a law change centred on commercial rather than public health considerations.

Drivers behind included how to manage private sector firms which had realised that there might be a dollar to be made in provision of digital identity services, and how to manage inter national digital trade — the Cabinet paper suggested there might be between $1.5billion and $9billion in it for NZ Inc should a properly functioning digital identity scheme be in place.

The Government is also intending to create a ‘‘consumer data right’’ for individuals, work which will rely heavily on an identity framework being in place.

The Cabinet paper suggests this had been something of a wild west situation up until now as systems and structures have sprung up in an uncon sidered and unregulated way.

So, how does Dr Clark envisage we will be safe from predators in this brave new ecosystem?

That would be through a ‘‘trust framework’’, which all identity service providers will need to sign up to and then comply with.

The framework is to be overseen by a governance board made up of people with requisite experience and knowledge in the area, and any changes to the framework will need to be agreed after consultation with the sector and with the privacy commissioner.

The board will oversee a trust frame work authority, which will do the nuts and bolts stuff such as accreditation, investigation of complaints and
remedying any issues.

This was always going to be important work from a business perspective, but Covid-19 sticky beaking its way into the discussion adds a whole other as yet unconsidered dimension to this legislation.

All identity providers, but RealMe in particular, may well find a need to create systems to enable more than a simple sale and purchase agreement for goods or services, and whatever rules that are put in place to safeguard that process will need to have added flexibility for a novel situations which keep on arising in a Covid world.

As the definition of ecosystem says, it is a complex or interconnected system, and it is seemingly getting more complex and interconnected by the day.