Runner beans a matter of perspective 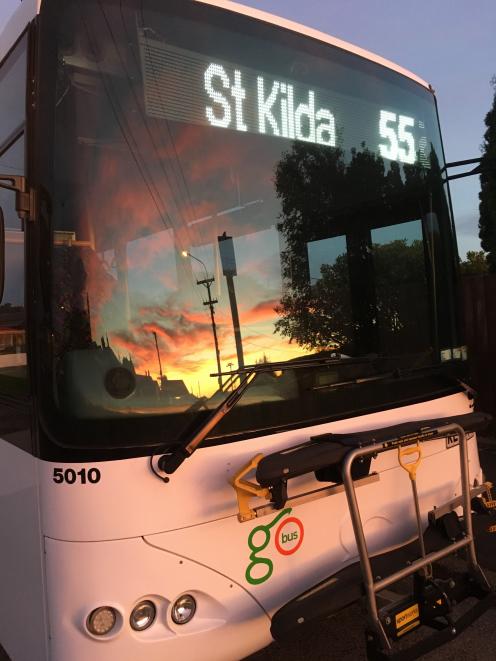 The Brockville bus terminus might not be everybody's idea of paradise, but Go Bus Dunedin driver Robby Rutschmann was lucky and caught Tuesday's vivid sunrise on the windscreen of his Volvo. PHOTO: ROBBY RUTSCHMANN
Good morning readers and welcome to Friday. I'm sorry to say this is the last column for a couple of weeks, while I take a break and Easter comes and goes.

This is the 75th What's With That and, with 800 words each time, by my rough calculations that comes to 60,000 words so far. Hopefully you'll come up with lots more ideas which will fill up my inbox for my return.

Now, from the "water going down the plughole in different directions" file, comes some interesting thoughts on runner beans from George Holt, of Pine Hill, in Dunedin.

George wants to add some comments to the "Ask a Scientist" column in the ODT last Friday.

To recap: Charles Jelley, of Wellington, asked in that column why climbing beans spiral in opposite directions in the northern and southern hemispheres. Plant and Food Research plant developmental geneticist Ross Bicknell replied he was unaware of any robust experiments that had shown this to be the case.

George says "entwining clockwise or anticlockwise" is all a matter of perspective.

"It depends whether you are looking at the plant from above or from below. I have never seen the direction of winding mentioned and the point-of-view mentioned together. This means, of course, that we are left totally in the dark about what is meant.

"I will assume we are looking up at the plant and call the direction `clockwise' when the vine bends or winds to the right. The proper term for this 3-D shape is a right-handed helix. Winding anticlockwise would mean winding to the left, as seen from below, making a left-handed helix.

"With that sorted, we can precisely understand what I mean when I say, from my own observations in New Zealand and the United Kingdom, scarlet-runner beans wind the same way in both hemispheres (which I would describe as clockwise when viewed from below or a right-handed helix).

"The plant does not `follow the sun'. My guess is it is some touch-sensitive mechanism in the growing area of the plant. Tendrils of peas and pumpkins show similar traits."

Thanks George. Fascinating subject. I'm sure others will have observations to share.

Interesting to watch the apparently steep learning curve on using the new Barnes dance in central Dunedin. I've already had a few callers telling me how pedestrians are still going around the edges of the "triangle" (if I can describe it that way), during one phase of the lights, rather than walking diagonally across the intersection. Perhaps they need to reintroduce dancing lessons at school?

More on this in a couple of weeks. 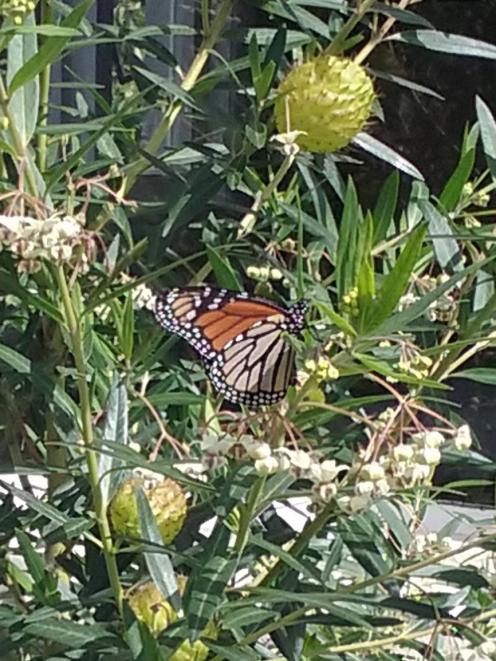 George Morris, from Abbotsford, says the monarchs are "alive and well" there.

"I've had 40-plus caterpillars on my swan plant. As they were eating the swan plant so fast, I had to adopt 20-odd out to my brother and had to get some branches off his swan plant to keep them going.

"They are eating us out of house and home. They are very large, so let's hope the butterfly stage is not too far away."

Ann Charlotte, from Waikouaiti, says she has had three monarch butterflies visit her swan plant in the past week. "Sadly I don't think they stayed long enough to lay eggs, but I'm ever hopeful."

Adrien Dever, of Forbury, has a question:

"Can any readers tell me why, when monarch caterpillars are ready to go into the `J' position, they wander off the swan plant and attach themselves to almost anything. I found one attached under a rhubarb leaf, another was on my tomato plant, another on a shrub, and last season one wandered out of our property and we found it crawling along the footpath, some distance from the swan plant.

"I have taken one potted swan plant inside and put some of the larger caterpillars on it. So far one has disappeared, another is making its way up to the ceiling and one is in the `J' position. At our last house, we had several pots inside and the caterpillars would climb walls, attach to light fittings, under the side of pot plants, paintings, etc."

Good question, Adrien. Can anyone help her out?

As regards feeding the caterpillars when they've almost stripped the swan plant, John Holtz, of Green Island, says when he lived in Kapiti, a lady at the post office suggested laying slices of pumpkin at the base of the plants.

"They will eat the plants right down to the roots and then feed off the pumpkin - the only difference being that the droppings go from green to orange. But mine all survived.

"The other thing I had to do was save the cocoons that dropped to the ground after the stems they had attached themselves to had been eaten.

"I used to tie cotton around the stem of the cocoon and hang them on nails around my deck. They all hatched. I must have saved a couple of hundred in my time - it's labour intensive but very rewarding.

"The other thing I did was reduce the number of new eggs by squashing a few. If they'd all hatched, it would have been impossible."

Thank you to all readers for your input on monarchs.

That seems to be about it for now. I hope you have a wonderful Otago Anniversary Day, and then a happy and safe Easter.

See you back here on April 9.