Universities succeed when they produce thoughtful leaders, not technocrats 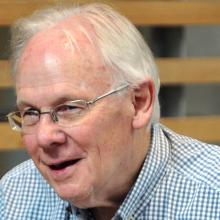 Gareth Jones.
The place of humanities in a university raises issues that extend far beyond one department, argues Emeritus Prof  Gareth Jones.

Jennifer Doudna, a pioneer of the genome-editing technology, CRISPR-Cas9, published a ground-breaking paper in 2012, outlining how this bacterial system could be used to engineer genomes.

She admits she is a dyed-in-the-wool scientist but began to realise throughout 2013 and 2014 that this technology was being rapidly adopted for applications across biology, from modifying plants, to altering butterfly wing patterns, to fine-tuning rat models of human disease.

It dawned on her that researchers somewhere would begin using the technique in human eggs, sperm and embryos to create heritable alterations in people (the first human trial was approved in China in July of this year).

By the early months of 2014 she realised an ethical storm was brewing around the technology she had helped create. She knew she could no longer remain the disinterested scientist and had to enter the ethical fray, however ill-equipped she felt to talk about this.

She realised she was being pushed outside her scientific comfort zone by engaging with ethical questions and relied on colleagues to educate her.

This is just one example of the importance of being able to cross disciplinary boundaries and look to other disciplines to throw light on one's own specialist areas.

We need lawyers who understand biomedical science or elements of commerce; we need doctors who have an appreciation of the medical humanities, let alone of English literature or Maori worldviews.

The examples are endless but each one in its own way points away from any silo mentality and towards the notion that universities should be producing well-rounded, thoughtful and well-educated graduates.

That is, people who think about the society and world in which they live and who are in a position to contribute to that society. If universities are not producing the leaders of the future, they are failing miserably, no matter how well they are educating technocrats.

This is where the humanities enter the picture, since they are integral to enlarging people's horizons and forcing them to think critically.

This does not mean that all students have to take one or more humanities papers, although that may be a good thing. What it does point to, from my perspective as a scientist, is that there should be some input of humanities-type material into papers and programmes outside the humanities (including the sciences and health sciences).

There are many ways this can be done and some will be more successful than others. One small example from my own experience is that for a number of years I have given five lectures on ethical and applied issues in neuroscience in a 200-level anatomy neuroscience paper.

The aim is to confront students with perplexing situations and to help them think through these in a preliminary fashion. It is also to demonstrate that the world of the brain is far from simple and that the social consequences of this can be ethically and personally daunting.

The latter takes us down the road to a blinkered existence. The world of the graduate is rarely a neatly encapsulated one where science is everything or the arts are everything.

If we are to talk to each other and understand each other, we have to be equipped to appreciate the input of others, and accept that our own specialist approaches (whatever they may be) have inbuilt limitations and are enlarged by other perspectives.

The attributes expected of Otago graduates include commitment to intellectual openness and curiosity and awareness of the links among disciplines, an ability to communicate information, arguments and analyses effectively, and an ability to analyse issues logically and challenge conventional assumptions. In my view these are unlikely to be attained if graduates are blind to what the humanities have to offer.

This may require some innovative thinking but we will all be the poorer if we fail to investigate these possibilities. It may also help to increase the attraction of the humanities for a broad swathe of students.

-Gareth Jones is emeritus professor of anatomy, University of Otago.