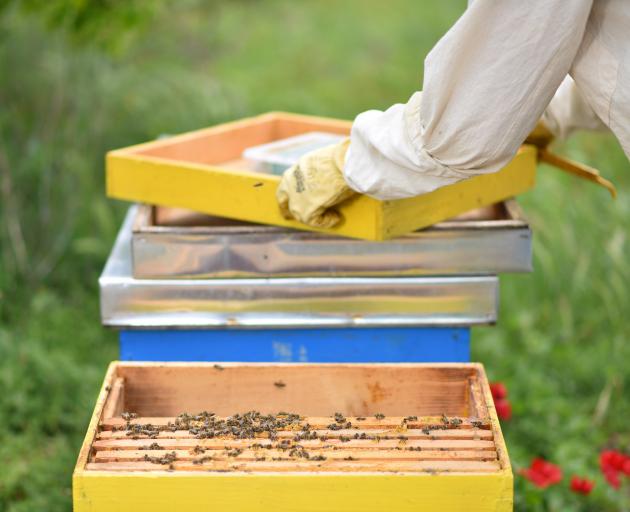 Bees are essential to our economy, food production and wellbeing. PHOTO: GETTY IMAGES
Brian Ellis outlines the importance of bees in urban areas.

The Dunedin City Council is reviewing its bylaws on animals in urban gardens, which include bees. We need to balance the importance of animals and insects within our city with any possible harm they may cause. As far as bees are concerned they have an essential role and their potential for nuisance is low.

Honey bees (Apis mellifera) are one of the most fascinating colony, forming insects. They were imported to New Zealand in the 19th century to assist with pollination of crops and to provide honey.

A honey bee colony is highly structured with a queen bee, workers (female) and drones (male) that each have their allotted roles. Foraging bees search for sources of pollen and nectar up to 5km from their hive. So the bees in your garden are likely to have come from anywhere in Dunedin and beyond. They are able to navigate their way home using the sun as a compass, even on cloudy days. Once home they discharge their load and communicate the distance and direction of good sources to other bees in the hive by a movement known as ‘‘the waggle dance’’. While each bee type has its own role within the hive, the colony behaves like a single complex organism.

Bees are vital for our food and wellbeing. We depend for much of our food such as vegetables, fruit, nuts and spices on pollination. Beef and dairy production is heavily reliant on forage pollination by insects. Pollinators contribute to nearly 10% of the total value of the production of food worldwide. While pollinators include bumblebees, native bees, other insects and birds, the honey bee is by far the greatest contributor to pollination.

In recent years there has been a growing interest in bees and beekeeping. Many urban beekeepers keep bees because of their fascination with bees and to support pollination in their locality. The production of honey is useful and enjoyable but often not the main purpose for keeping bees.

It is essential that we maintain honey bee colonies and increase the understanding of the nature and importance of bees. Bees worldwide are under threat from a number of diseases such as the Varroa mite and American Foul Brood. The Varroa mite sucks the ‘‘blood’’ out of bees and transmits other diseases such as viruses which eventually, unless treated, cause the colony to die. American Foul Brood is a highly infectious bacterial disease, the only treatment for which is killing all the bees in the colony and burning the hive to minimise the risk of transmission to other hives.

Insecticides have contributed to the loss of some colonies. Although this has not been a major problem in New Zealand, the indiscriminate spraying of insecticides is a potential threat. Any spraying of insecticides in urban as well as rural areas needs to be undertaken with caution and with regard to any bee hives nearby. In some countries hive losses have been up to 30% per year and pollination by hand has been necessary in some parts of China due to the loss of bees. Climate change is another factor to consider as, with global warming, diseases and pests, particularly some prevalent in Asia, could well become established in New Zealand.

In recent years there has been considerable increase in growing vegetables and fruit in urban gardens. This has been attributed to a desire for a more healthy lifestyle with the trend to a more organic culture and the benefits of exercise through gardening. Along with this has been the recognition of bees as an important contributor to the pollination of these crops and the establishment of hives in urban gardens. A number of schools in Dunedin have their own hives which provide education on the importance of bees and beekeeping. A concern among some people may be the potential for being stung. Bees will sting predators, including humans, who invade their hives so as to protect their colony and its resources. Apart from this, bees out foraging are primarily concerned with collecting pollen and nectar and will generally not sting unless accidentally provoked.

Bees do swarm, which is part of their nature to increase the number of colonies. In spring, the colony will produce new queens in special cells in the hive. When they hatch, the old queen leaves with up to about half the bees in the colony. The swarming action can be spectacular with the bees circling the hive and then moving off to a nearby tree or bush. They then send out scout bees to find a permanent home. Immediately prior to swarming, the bees gorge themselves on honey so that the swarm can survive for a number of days. Bees in a swarm are much less likely to sting, but still can. Local beekeepers provide a service to collect swarms which not only helps those who may be concerned about a swarm nearby but also provides a source of new colonies.

Bees sting only once and then die as in the stinging process the sting and associated organs are torn out of the bee. This is why honey bees generally only sting when absolutely necessary and to protect their colony. Wasps on the other hand can sting multiple times and need little provocation to sting. Wasps are often confused with bees and beekeepers may be asked to deal with an apparent swarm which is in fact a wasp nest.

In summary, bees are essential to our economy, food production and wellbeing. Bees in an urban garden could have visited from anywhere in greater Dunedin. Bees are focused on gathering nectar and pollen so are generally not interested in humans and animals unless provoked. Bees are under threat worldwide, including New Zealand, so every effort should be made to support bees and beekeeping, including in urban areas. A bee swarm can be of concern but is infrequent and something bee keepers try to prevent. If you see a swarm then contact the DCC, a local beekeeper or the Dunedin Beekeepers Club so that someone can remove it safely and without harm to the bees.

- Brian Ellis is president of the Dunedin Beekeepers Club.

High numbers of honeybees can actively harm wild bee populations, because they compete directly for nectar and pollen. ... A lack of flowers is one of the main factors behind the decline in bee populations. Initiatives such as urban beekeeping put more pressure on wild bees and worsen the decline.

In theory you are right but in fact our wild bee population has been decimated, almost to the point of extinction by varroa mite.
Domestic bees are essential to our farming and horticultural industries. I would recommend anyone to install a bee hive in their backyard. Most apiarist will provide this service, do all the work and pay you in honey.

There certainly will be competition, but there are also different flower preferences between domesticated and wild bees. One of our plum trees is pollinated by honey bees, whereas another plum tree with much smaller Manuka-like flowers is pollinated by a small NZ bee.
I doubt there is shortage of flowers/food. Around Dunedin there is such an abundance of Hawthorn and Kanuka. Observing those and how many bees frequent them I would say more than 80% of nectar and pollen goes to waste.
Bees and Nature in general have suffered more from human intervention (pesticides and herbicides) which ultimately has led to diseases because we have disturbed the balance.
On a different note: what is unknown is often feared and consequentially considered a nuisance. I would like to plead in favour of urban beekeeping, perhaps with a few recommendations so that urban beekeepers and non-beekeepers can live and enjoy together. Bees are wonderful, interesting animals, mesmerising if you get people to sit and observe. Education and the willingness to share and adapt on both sides is key!

There is a difference between domesticated honey bees, feral honey bees and NZ native (solitary) bees. Domesticated ones are kept by beekeepers in hives, feral ones are the same introduced species but (used to) live in hollow tree trunks and other suitable cavities, uncontrolled by humans. Both the domesticated and feral honey bee are susceptible to Varroa and because feral ones have not been looked after there are hardly any feral colonies left in the world.
The NZ native bee (not just one species, but there are several known thus far) live as solitary animals, not in colonies, usually in small holes in the soil. They are NOT affected by Varroa and specialise in getting their food from native plants (though not exclusively). Honey bees have longer tongues and can therefore extract honey from deeper flowers, the fruit trees, most clovers etc. There is plenty of room for them to live side by side.
Honey bees live in colonies and are considered a super organism. Comparing numbers of honey bees with numbers of native bees is not correct. If a honey bee colony dies that means the super organism dies, one organism, but that organism can exist of up to 50,000 individual honey bees.