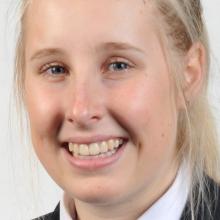 Ashleigh Smith.
"If you put your heart into something, you can do anything."

New Zealand’s Queen’s Young Leader Award-winner for 2017 Ashleigh Smith offers those words to explain why living in a small rural area such as Naseby is no barrier to success. The 19-year-old nursing student is proud of her country roots and says her community’s support is a vital element of her achievements. Miss Smith’s latest accolade is for her work as a co-leader of student-led anti-cyberbullying group Sticks’n’Stones. She will receive a package of training, mentoring and networking, delivered extramurally through Cambridge University, and will spend 10 days in England in June and receive the award from the Queen. Commonwealth Youth New Zealand executive director Aaron Hape said he was sure people would be inspired by her passion.

"I am absolutely thrilled to see the amazing work that Ashleigh has led nationally and internationally to fight cyberbullying has been rightly recognised by the Head of the Commonwealth, Her Majesty the Queen," Mr Hape said. Miss Smith was told a Skype call at 11pm on Monday would be the next stage of award nominees’ interviews.

"Instead it was the call telling me I’d won, which was so lovely ...  I didn’t get much sleep that night," she said.

"Winning this is just overwhelming. I’m struggling to explain what it’s like."

She has two more years of study at Otago Polytechnic for her nursing qualification and is back home in Naseby now for the holidays, with work in a cafe lined up.

As part of her role in Sticks-’n’Stones, she mentors young people in schools throughout Central Otago and Dunedin, helping pupils run workshops about bullying and mental health. The group was formed in 2013 and now has more than 300 volunteers. Sticks’n’Stones  national manager Karla Sanders said the group was "incredibly proud of Ashleigh, as one of our founding members and a spokesperson nationally for us,  for receiving such a prestigious award".

As one of the founders, Ashleigh helped shape the direction and focus of the group and still took an active role  as vice-chairwoman of the Sticks’n’Stones board, juggling that role and mentoring of young people with her nursing studies, Mrs Sanders said.