A change in the weather has helped Otago fire crews extinguish two large blazes that got out of control yesterday.

The fires, near Macraes and Queenstown, were both caused by burn-offs, prompting Fire and Emergency New Zealand (Fenz) to urge caution about the way farmers carried out the practice.

The blazes burnt through almost 2000ha of land, but were largely under control by yesterday evening.

Fenz this morning said rain and snow accompanying a southerly change overnight had effectively dampened down the Queenstown fire  - on Ben Lomond - and while crews would monitor the site today, no further issues were expected.

A Fenz update said the Macraes fire - inland from Palmerston - was monitored overnight and there were no obvious signs of fire activity this morning. Fire managers would monitor the site today to ensure there are no re-ignitions.

Crews were called to the Macraes blaze, in the Red Bank Rd area, about 6.30am yesterday after what started as a controlled burn quickly went beyond the 200ha intended boundary.

There was no threat to property, and crews had ensured power lines to the Macraes township were protected. 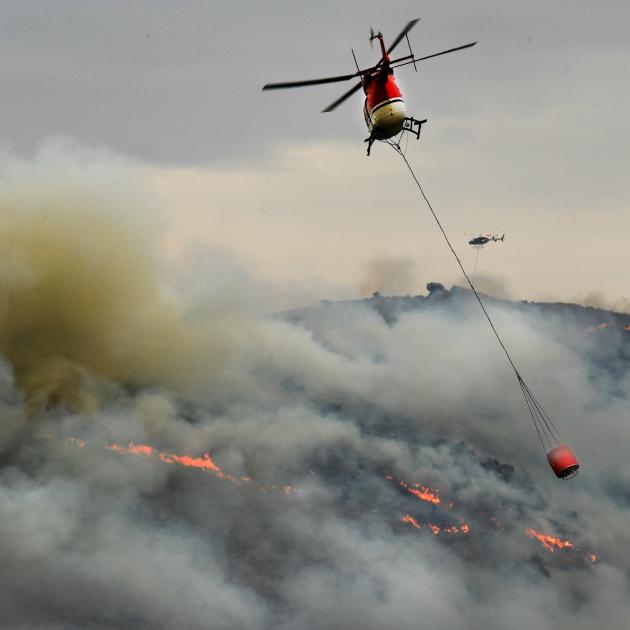 At one point, seven helicopters were tackling an out-of-control burn-off near Macraes yesterday. PHOTO: STEPHEN JAQUIERY

As many as seven helicopters and five ground crew tackled the fire, but by afternoon, aerial efforts had been reduced as winds eased and temperatures dropped.

It began on Tuesday evening but yesterday spread to cover an estimated 800ha-1000ha of tussock and land.

A Fenz spokeswoman said the fire was contained during the afternoon, but pockets were still burning.

Two helicopters remained on standby yesterday evening but the blaze posed no threat to life or property.

"Fire managers are confident the fire will remain in the catchment and will burn out once it reaches the snow line of Ben Lomond," the spokeswoman said.

The spokeswoman said as both fires were caused by high country burns, land managers in Otago were being asked to talk to Fenz before any burn-off.

"Fenz understands the need to prepare land with fire but wants to ensure everyone impacted is notified."