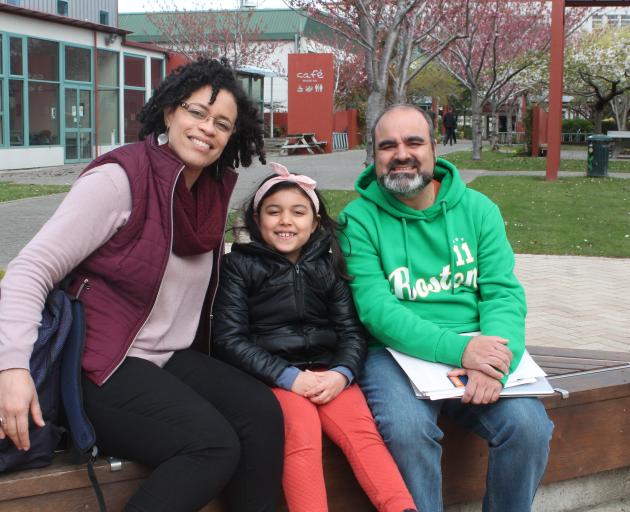 Brazilian couple Clara and Danilo Casaes, pictured with their daughter Heloisa (7), would like to have more certainty about their future. PHOTO: LUISA GIRAO
A group of students is urging the Government to broaden eligibility for the recently announced fast-tracked 2021 resident visa.

Brazilian couple Clara and Danilo Casaes moved to Invercargill in January last year. Both are completing masters’ degrees in information technology at the Southern Institute of Technology (SIT).

Both were excited with the visa announcement last week but are also disappointed people like them, on student visas, will not be considered for the pathway visa.

The pathway visa, announced by Immigration Minister Kris Faafoi, will provide a one-off, simplified pathway to residence for about 165,000 migrants in New Zealand on mostly work-related visas, including essential skills, work to residence and post-study work visas.

An environmental engineer, Mrs Casaes said she believed people who were on a student visa and eligible for the post-student work visa in the next year should also be included in the new programme.

‘‘The news is great and needs to be celebrated, but we feel that we missed it,’’ she said.

‘‘We both work in areas of high demand and have been here [in New Zealand] through the whole pandemic.

The pathway visa could be granted to students on the condition they completed their studies, she said.

‘‘This could give us some kind of certainty as we can’t do any long-term planning at the moment. We feel very anxious.’’

Mrs Casaes is among thousands of people who have signed a petition calling for the Government’s new residency plan to be expanded to include all visa holders who have lived in New Zealand for three or more years, earn the median wage, or work in a role on a skill-shortage list.

Petition organiser Rachel Swann was granted an essential skills work visa in 2018 but swapped to a partner of a student work visa recently to improve her job prospects and gain more points to qualify for residency under the skilled migrant category.

Now, she was disappointed she would not be eligible for the recently announced pathway visa, she said.

‘‘It is incredibly disappointing given that for the past 12 months the Government has been saying to us ‘get high-skilled jobs or high-skilled qualifications in New Zealand to be eligible for residency’. Now, by doing that, we are not eligible and frustrated.’’

Support had been overwhelming, the petition having gained more than 19,000 signatures since it was launched last week, she said.

Mr Faafoi said the Government considered the broad criteria for the 2021 resident visa comprehensive and was comfortable with the rules.

‘‘They will provide a pathway to residence in New Zealand on a massive scale, but I acknowledge it is not a pathway for which everyone will be eligible.’’

However, other visa options and pathways might be available to those people who did not meet any of the criteria for the 2021 resident visa, he said.