Bluff. Photo: Stephen Jaquiery
Vulnerable people in the Bluff community have been told they will have to wait until the end of July to get vaccinated against Covid-19, due to a vaccine shortage.

The unvaccinated include a 101-year-old and other older people who are still waiting, despite 35,000 people nationwide in Group 4 who have now received at least one dose of the Pfizer vaccine.

The Bluff Community Medical Trust had hoped to have a clinic up and running for those in Group 3 by the start of July.

"Unfortunately, we have since received notification from the MoH (Ministry of Health) that there is a shortage of the vaccine," the Bluff Medical Centre said in a notice to the community.

"This means that our planned clinic, and those of 40 other clinics, have been put on hold."

Trust office manager Yvonne Pickford said the trust had been in constant contact with the Ministry of Health and had ticked all the right boxes.

"To be notified that, sorry, it's not going to happen - it's very frustrating. We've got a 101-year-old lady here in town who we'd like to get vaccinated. We've got 90-year-old patients who are wanting to be vaccinated.

"It has caused us a wee bit of angst. We've all sort of sworn a little bit - or a lot." 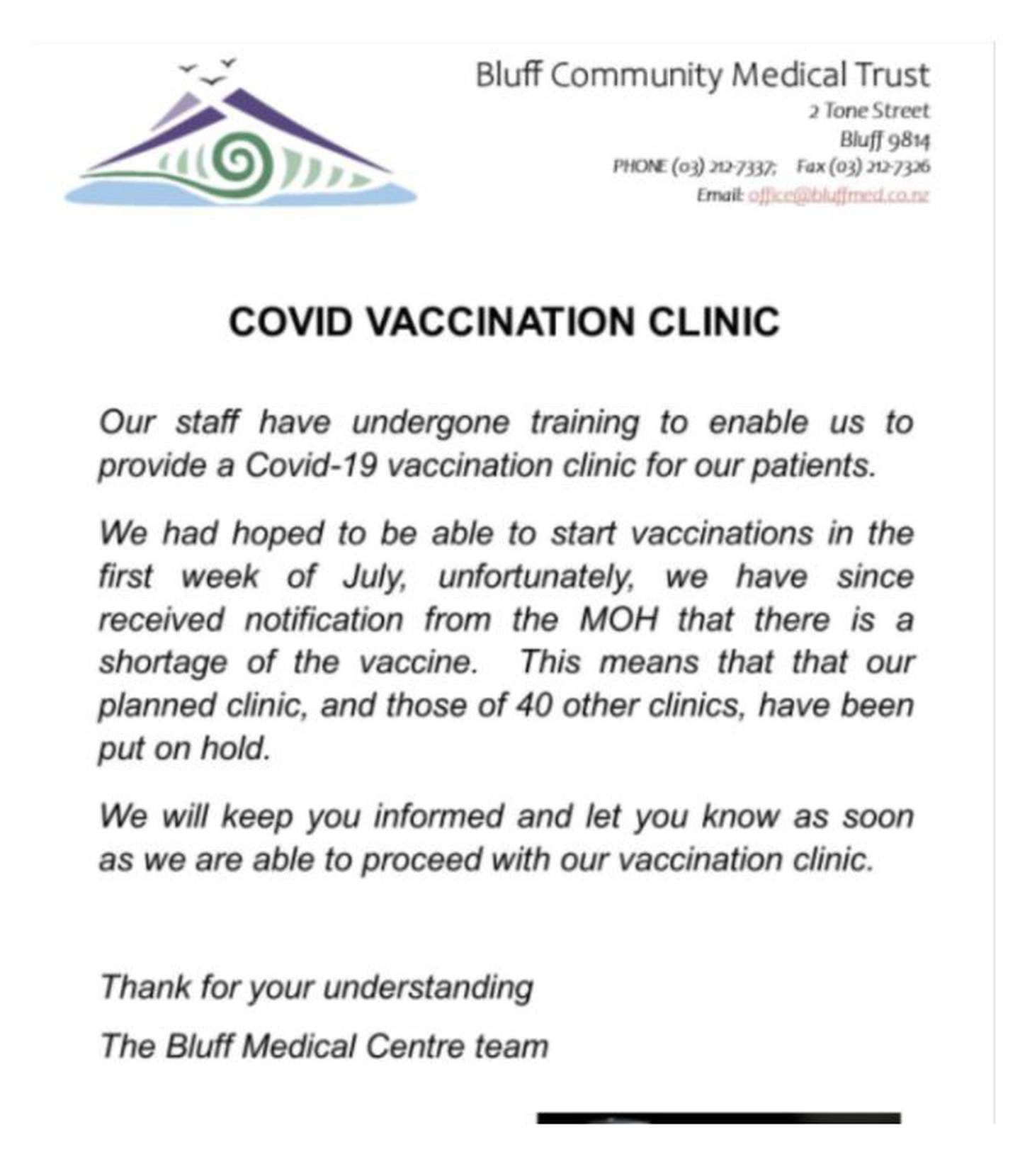 A notice sent out to the community by the Bluff Medical Trust.
She said patients had told her they've called the 0800 number to book appointments and been on hold for 45 minutes.

"And then it's going to be a four-week wait before they actually get an appointment - in Invercargill.

"We've got a high population of Maori and high-needs patients, and a high percentage of 65 and over. Some of them can't travel to Invercargill. That's why we're trying to push to get a clinic for our patients. They should get vaccinated here."

She understood that their planned clinic wasn't the only one that is now delayed.

"Some other places have actually rented out community centres, and then they are not happening either because - same as us - they've been told that there will be no new Covid vaccination clinics rolled out at this stage."

The Southern District Health Board has been contacted for comment.

Prime Minister Jacinda Ardern said there was no vaccine shortage when asked this morning.

"I wouldn't describe it as a shortage. We've always had constrained supply.

"What we've always said is that we have been very closely managing the number of vaccines we have coming into the country ... As we're ramping up, we are going to get to a point where it gets very close to the wire.

"Those who have booked in for vaccines, we're retaining those bookings. What we're trying to do is discourage walk-ins."

She said there have been almost 1 million doses administered, and the rollout was running at 107 percent - ahead of the delivery target.

"It is ramping up as we expected."