Southland forwards wait for the ball to be thrown to a lineout during their Mitre 10 Cup clash against Counties Manukau in Invercargill on Saturday. Photos: Getty Images
Those first few moments after the final whistle were a little awkward.

No-one was quite sure just how to celebrate.

It had been nearly three years since Southland had been in that position. 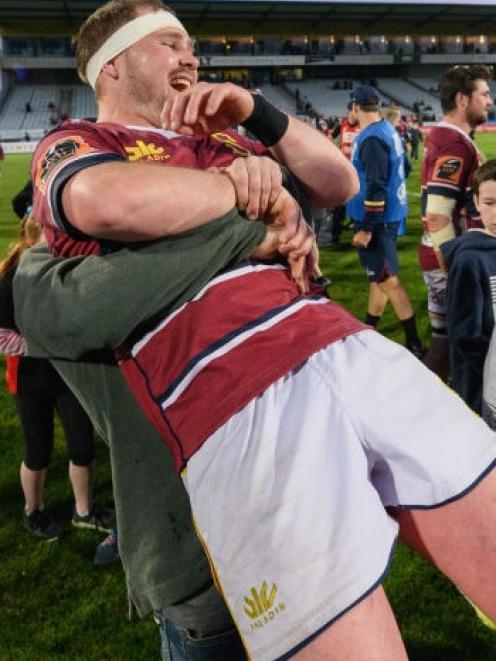 ''Don't get me wrong, the guys were really happy. But I think the first thought was 'thank God, that is over'.

''To be honest, we were a little bit unsure what to do post-game, given we have not been in that position for a while.''

The Stags have been threatening to win games this season. Their defence has been admirable and they have also created scoring opportunities.

But any good patches have unravelled all too soon.

''We did that against Northland, North Harbour, Hawke's Bay and also against Manawatu for half a game.

''There have been times when we've shown what we can do. We just haven't been able to put it together for 80 minutes. But on Saturday it was an 80-minute performance.''

Stags flanker Matt James, who had an outstanding match, got himself over the ball and won an early penalty.

Marty McKenzie drilled the three-pointer but the crucial moment came midway through the half.

Counties had been pinned deep in its territory and had given up a series of penalties.

The elastic snapped when loose forward Sikeli Nabou got himself offside. He went to the bin and Southland went left to winger Rory van Vugt who scored in the corner.

The Stags followed up with a blunder, though. Ray Nu'u tossed up a looper to his right and centre Nikolai Foliaki picked it off.

Counties was caught napping three minutes later when halfback Logan Crowley ran through a hole at the back of a lineout.

McKenzie added another penalty to help his side take an 18-7 lead into the break.

Southland made three times as many tackles in that first half and had to make quite a few more early in the second spell.

The Stags, though, snaffled a crucial turnover at the breakdown. Prop Joe Walsh played poacher this time and Southland swung on to attack.

Hooker Greg Pleasants-Tate got himself in the caboose of a lineout drive and crashed over and, when Nu'u slipped a pass to centre Isaac Te Tamaki under the posts, the long-awaited win was all but secured. Winger Lewis Ormond grabbed an intercept 50m out to seal the victory.

Counties scored a consolation try with seven minutes remaining. The visiting side will rue its poor discipline but Southland's tenacious defence was finally rewarded with a comprehensive victory against a talented side.

Southland has a short turnaround this week. It plays Taranaki in New Plymouth on Thursday.