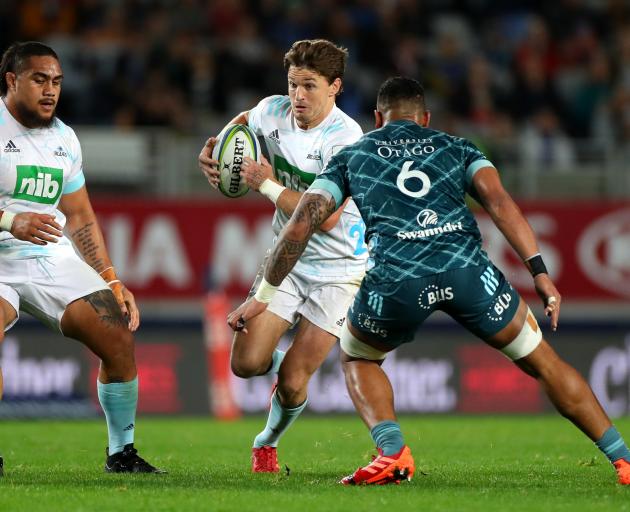 Shannon Frizzell of the HIghlanders lines up to tackle Beauden Barrett of the Blues in a nail-biting match at Eden Park. Photo: Getty Images
The Blues remain unbeaten in Super Rugby Aotearoa - but only just.

Nearly everything Leon MacDonald's men touched in the first half turned to gold as the Blues powered out to a 22-10 halftime lead after scoring three tries and controlling the game through precise tactical kicking.

At that point, the Blues were so dominant it seemed they would canter to victory but they then went to sleep and were pushed to the brink.

The second half turned into a dogfight. In the end, the Highlanders will feel desperately unfortunate not to steal an upset victory after an inspired second half performance.

Highlanders first five-eighth Mitchell Hunt scored a solo second-half try to bring his team back into the game but he could not nail a 73rd minute penalty to tie the scores.

On the back of two ruck penalties from referee Paul Williams, the Highlanders set up camp in the Blues 22 during the closing stages but they could not find the killer punch.

The Blues defended one rolling maul that finished metres out from their line – this effort ultimately the difference between maintaining their unbeaten record after three games and suffering their first defeat.

Caleb Clarke can claim much of the praise for the Blues victory, having channelled an emotional evening at Eden Park.

As the 27,000 strong Eden Park crowd paused pre-kickoff to honour slain Constable Matthew Hunt, who died in the line of duty in Auckland last week, Clarke was in tears.

The highly-promising wing lost his grandfather earlier in the day and was clearly a swarm of emotions as he prepared to take on a spirited Highlanders side rejuvenated since lockdown.

Clarke is a man of deep faith, and after scoring the opening try he pointed to the sky in tribute. After another memorable performance in which he laid on another try and showcased his talents in the air by snaffling a restart, Clarke should be comforted, somewhat, in the knowledge that his grandfather and family will be immensely proud of his efforts.

Despite those efforts, the Highlanders never stopped coming.

While their backline wasn't as slick the visitors', their forward pack competed well all night – No 8 Marino Mikaele Tu'u snaffling turnovers and enjoying a quality battle with opposite Hoskins Sotutu.

Blues playmakers Otere Black and Beauden Barrett orchestrated a tactical kicking masterclass, particularly in the first half, as they regularly nudged the ball in behind the inexperienced Highlanders wingers and into the corners to control much of the territory battle in wet conditions.

With the Blues applying pressure through the boot, Highlanders fullback Scott Gregory had a night to forget as he shelled several kicks and gifted Dalton Papalii the first of his double after a Sotutu charge down.

Blues captain Patrick Tuipulotu and loose forward Dalton Papalii, who scored two tries, often put their men on the front foot but MacDonald's men far from had it all their own way.

Defensively the Blues will rue their sloppy start to the second half when they dropped off several tackles and lost two lineouts which allowed the Highlanders back into the match.

The Highlanders did not need a second invitation to exploit big holes in the Blues defence. First Hunt sold a dummy and waltzed through. The Highlanders then had Ngane Punivai's try scrubbed out after a Hunt errors at the breakdown was belatedly spotted. But from the resulting penalty Rieko Ioane was sent to the bin and Shannon Frizell crashed over to give the Highlanders the lead.

The Blues again found the composure to hang on when it mattered most - just as they did in previous wins over the Hurricanes and Chiefs.

While they head into the bye unbeaten the Blues will know how close they came to losing this match.

- Technical difficulties prevented us from bringing you the final 15min of the game through our live blog. We apologise for any frustration this may have caused. - ODT Online