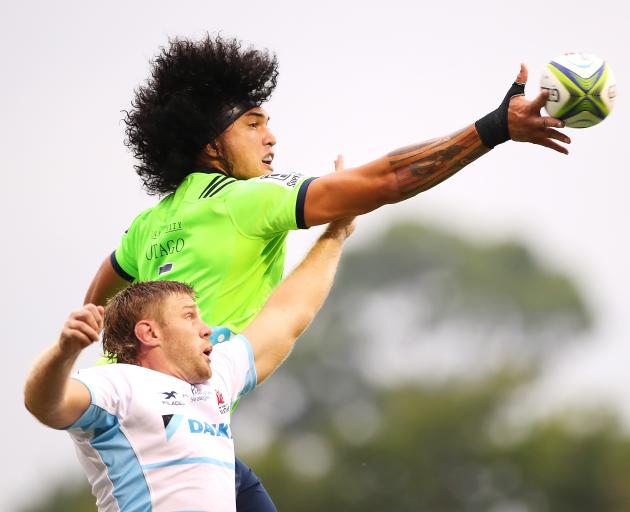 Highlander Peri Peri Parkinson wins the lineout ball in their preseason match against the Waratahs in Sydney. Photo: Getty Images
The start was great, the rest a little shaky.

The Highlanders led 14-0 early, but were beaten 40-21 by the Waratahs in their preseason match at the Leichhardt Oval in Sydney last night.

There were flashes of positivity from the Highlanders.

They looked to play with pace and width on attack.

Early they looked good doing so, making several breaks and showing they could hold the ball to build phases.

However, as the rain started that became more challenging and the attacking threat was dampened.

Meanwhile defensively they looked to get up fast and apply pressure.

At times that forced mistakes out of the Waratahs backline.

However, it also left the Highlanders exposed, and they had a tendency to creep up offside.

Discipline proved the main issue in the first half, with the side regularly giving up offside penalties that during the season would be turned into three points.

As the game progressed the Waratahs began finding holes more readily through the middle.

It was that line speed which led to the first try though.

Centre Sio Tomkinson snaffled an intercept off a lineout and ran 40m to score in the second minute.

Nathan Vella made it 14-0 not long after.

The hooker crashed over after a nice build-up in which the Highlanders built phases and used the pick and go well.

It took the Waratahs 12 minutes to get the ball for any meaningful period.

When they did, they put the Highlanders under pressure.

Three minutes later prop Harry Johnson-Holmes scored off a pick and go to make it 14-7.

The second quarter passed scoreless, with the Highlanders withstanding two key periods of pressure on their own line.

That came at a cost — Tomkinson was yellow-carded for coming in the side of a ruck after a Mack Mason grubber left the Highlanders defence scrambling.

Carlo Tizanno crossed for the Waratahs not long after halftime, before Alex Newsome finished a Will Harris cross-kick to make it 19-14 to the hosts.

Marino Mikaele Tu'u scored off a lineout drive to put the Highlanders back in front, before Tizanno added his second to make it 26-21.

Michael McDonald scored a fifth for the Waratahs to make it 33-21, before James Ramm finished a bust through the middle on fulltime.

The Highlanders return home and will play the Crusaders in their next pre-season game in Wanaka on Friday.