Collins back to lead Otago against Manawatu 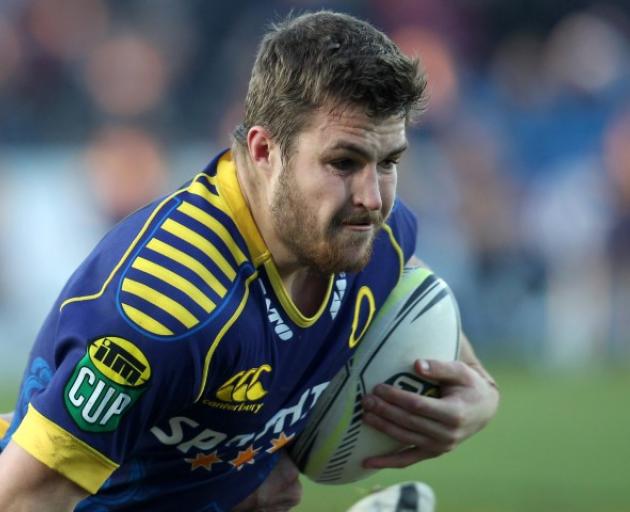 Michael Collins has been named at fullback. Photo: Getty Images
Otago coach Ben Herring said he had no hesitation in giving the captaincy to the returning Michael Collins for tomorrow's game against Manawatu.

Collins, who will play his first game for Otago since 2016, has been named at fullback for the Otago side and will also be the skipper of the blue and golds for the Palmerston North match.

He missed the first two games of the Mitre 10 Cup because of a minor fracture in his cheekbone picked up in the final pre-season match.

Herring said Collins was a good fit as captain.

"It's good to have him for the game and as a captain. He is a natural leader for us and we know what he can do.

"It's not a hindrance for us, having your captain at the back. He can handle the job fine while those around him can concentrate on their job."

Collins moving to fullback pushes Vilimoni Koroi on to the right wing and Josh Timu drops out of the squad. Mitchell Scott, who has been troubled by a hamstring injury, covers the outside backs from the bench.

Taieri midfield back Matt Whaanga gets his first start for Otago, having impressed when coming off the bench in the first couple of games.

Herring said Whaanga was getting his reward for those performances and would be looking to keep up that good run of form.

Sio Tomkinson moves out to centre and Matt Faddes comes off the bench. Faddes has been off the pace in the first couple of games and needs to get some spark and accuracy back in his game.

First-choice halfback Josh Renton is out for six to eight weeks after fracturing his thumb and it is touch and go whether he will be seen again this season.

Halfback Melani Matavao comes on to the bench.

Herring has opted for a different-looking loose forward trio with an emphasis on big bodies. Dylan Nel is at No8, Naulia Dawai is on the openside flank and Sione Misiloi starts on the blindside.

Herring said that for this particular game, the emphasis was to have some ball runners and ball carriers.

Hooker Sekonaia Pole will start at hooker and All Black Liam Coltman is on the bench. Herring said Coltman would look to make an impact at some stage but Pole had played well and deserved the start.

With Otago winless after two games, there is a hint of desperation about this match. The side needs to find more thrust in attack and eliminate some basic errors.

Manawatu won its opening game of the season against Waikato but lost heavily to Taranaki last week.

It has All Black winger Nehe Milner-Skudder on the right wing and Highlander Rob Thompson will start at centre.

The match starts at 5pm.