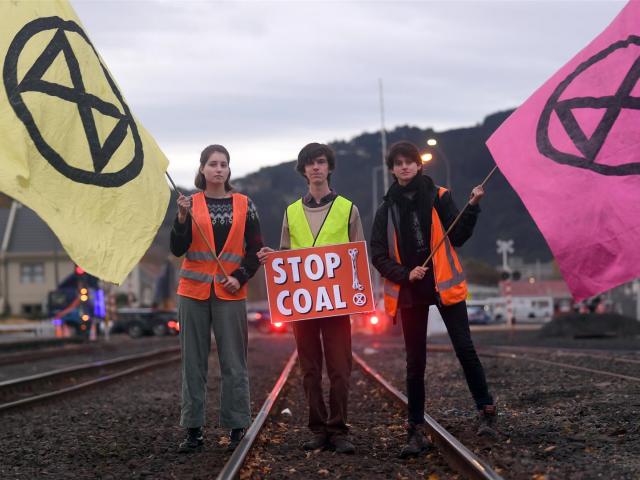 A train driver stopped by climate activists this morning did not see three youths on the tracks until the train was ‘‘dangerously’’ close, police say.

Small businesses such as restaurants and cafes could be impacted after the Climate Change Commission released its first report, with a raft of targets proposed to cut New Zealand's emissions.

No-one thinks coal is good for the environment. So, why is a coal-heavy, national mining forum about to be held in Dunedin? Bruce Munro takes a look.

Children are going on strike over their health and wellbeing while schools are still burning coal, writes Alex Macmillan.

An information night at Knox Church's Stuart Hall at the weekend, to discuss the Schools Strike 4 Climate rally in the Octagon on March 15, was a "great success", Zak Rudin (16) said yesterday.

"Keep the Earth clean. This isn't Uranus," he says.

Sustained levels of moderate warming could melt the East Antarctic Ice Sheet, possibly contributing to up to 19m of sea level rise, researchers, including one from Otago University, say.

The Wise Response Society - a coalition of academics, engineers, lawyers, artists, sports people and others - believes the target in the Zero Carbon Bill must be to reduce net emissions across all greenhouse gases to zero by 2050.

The Government has been urged to get tough on climate change in an open letter signed by groups ranging from Sanford and The Warehouse Group to the New Zealand Nurses Organisation and Wellington Zoo.

Because methane is a less persistent greenhouse gas, it has been regarded as a lesser evil. That calculation may need to be reassessed, Colin Campbell-Hunt writes.

It's crunch time for climate change but the memo does not appear to have reached the Government, writes Tom McKinlay.

New Zealand is unprepared for sea level rises of half a metre by the end of the century that could turn 1-in-100 year flooding events into annual occurrences, an extensive United Nations report on climate change has revealed today.

Scientist and historian Naomi Oreskes is looking for new ways to explain the urgent threat posed by global warming, writes Tom McKinlay.
Campaign strategist James Carville coined the phrase ''It's the economy, stupid'' to focus the attention of campaign workers on the one key issue that would get Bill Clinton elected president in the 1992 US election.