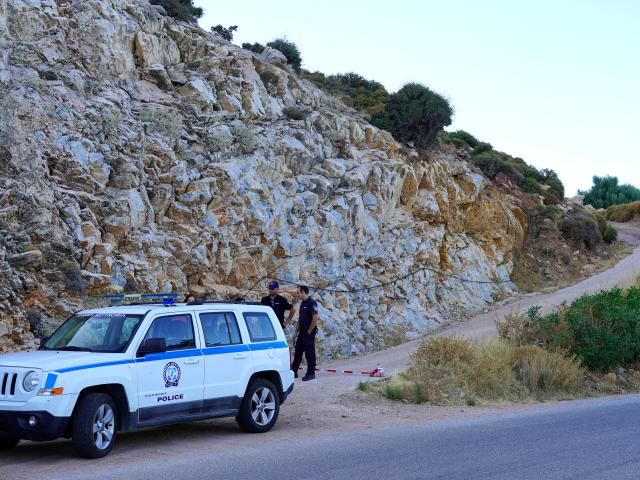 Greek police have found the body of a missing 35-year-old British astrophysicist and peace activist in a ravine on the Greek island of Ikaria.

An explosive device wounded a police officer and a civilian when it detonated outside a church in central Athens early on Thursday (local time), police and state media said.

Macedonia is ready to add a geographical qualifier to its name to help resolve a dispute with Greece that has held up its prospects of joining the European Union and NATO, Prime Minister Zoran Zaev said.

Black-clad protesters in southern Athens have torn down a red sculpture shaped like an angel and broke its wings in a fresh act of violence against an artwork critics liken to Satan.

Crews scrambled to clean up an oil spill from a sunken tanker which had spread to some of Athens's most popular beaches.

Firefighters battled more than 90 forest fires across Greece, an outbreak fed by dry winds and hot weather that saw blazes burning near Athens, in the Peloponnese, and on the Ionian islands of Zakynthos and Kefalonia.

Talks to reunify the divided island of Cyprus collapsed in the early hours of Friday, UN Secretary General Antonio Guterres said after a stormy final session.

A powerful 6.3 magnitude earthquake struck the western coast of Turkey and the Greek island of Lesbos, killing one woman and rattling buildings from the Aegean Turkish province of Izmir to the Greek capital Athens.

A conservative-led government has taken power in Greece promising to negotiate softer terms on its harsh international bailout, help the people regain their dignity and steer the country through its biggest crisis for four decades.

Parties backing a bailout saving Greece from bankruptcy have won a slim parliamentary majority, beating radical leftists who rejected austerity and bringing relief to the euro zone which was braced for fresh financial turmoil.

Euro-zone finance ministers agreed last weekend to lend Spain up to 100 billion on relatively easy terms to shore up its teetering banks.

The new buzz words "fiscal consolidation" are giving some hope austerity measures in Europe will be replaced by stimulus to strengthen euro-zone economies and reduce unemployment.

When no lesser person than the Governor of the Bank of England issues a warning that Europe is "tearing itself apart", sensible people, politicians included, need to sit up and take notice. And they are, as influential figures in the United Kingdom and elsewhere begin to prepare contingency measures against the eventuality that has put the entire Continent on edge: the exit of Greece from the euro zone.

Greece has put a senior judge in charge of an emergency government to lead the nation to new elections on June 17 and bankers tried to calm public fears after the president said political chaos risked causing panic and a run on deposits.

Financial markets are expected this week to show continued enthusiasm for the latest round of drastic austerity measures approved yesterday by Greek lawmakers.

Euro zone finance ministers told Greece on Saturday it could not go ahead with an agreed deal to restructure privately-held debt until it guaranteed it would implement reforms needed to secure a second financing package from the euro zone and the IMF.

Greece's coalition government has passed an austerity 2012 budget aimed at shrinking its debt mountain with tax hikes and spending cuts, hours after protesters clashed with police outside parliament.