'Tis the season to be wary 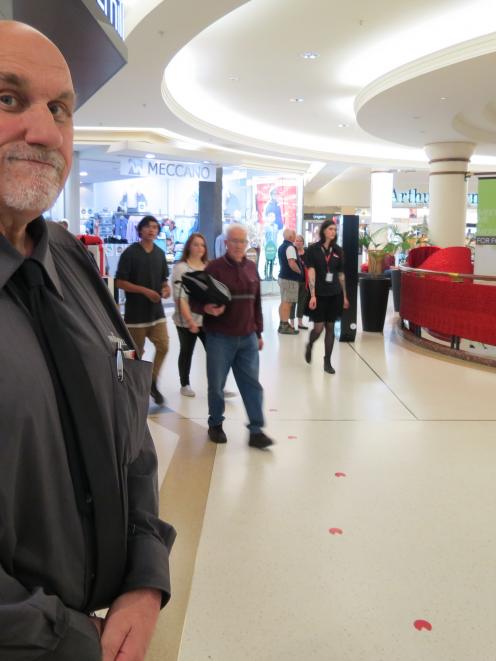 On guard... Meridian head of security Bob Aitken keeps a watchful eye on the mall. Photo: JONATHAN CHILTON-TOWLE
With the busy Christmas shopping period in full swing, shoplifting is expected to increase and Dunedin shopkeepers are being warned to remain vigilant. Star reporter JONATHAN CHILTON-TOWLE spoke to police and business owners about the problem.

When it comes to shoplifting, Meridian head of security Bob Aitken has seen a lot.

For the past eight years, he has been contracted from House of Hygiene to provide security in the busy central Dunedin mall.

He deals with shoplifters on a regular basis and every incident is different.

Sometimes,thieves would grab goods and run, others would eat sweets in a store and leave the empty packets, others might try to walk out wearing stolen clothes, and some would threaten shopkeepers, Mr Aitken said.

The most common item stolen was clothing, but Mr Aitken had seen people trying to make off with items as large as pushchairs. Regardless of the item stolen, the result was the same. The perpetrator would be escorted to the security office by two personnel, police called and a two-year trespass notice covering the mall issued. Depending on the age of the individual, parents might be called, he said. Meridian manager Michael Porter said that in the past three months the Meridian had 11 trespass notices issued for both stealing and disorderly behaviour.''

While seasoned criminals do feature among those trespassed this year, much of the reported shoplifting is somewhat opportunistic in nature, with school-aged females unfortunately being rather over-represented,'' he said.''

So far as the festive season fares, we are expecting the traditional increase in the level of shoplifting as we draw closer to Christmas, but it should be noted that the numbers are very much relative to the overall increase in foot traffic as experienced during the busiest month of the year.''

Meridian had security staff on at all times. They operated on a ''see and be seen'' philosophy as opposed to being hidden away in the security room.''

We find benefits in having guards specifically for this site as they can build rapport with our retailers, and they take ownership and pride in their site. ''Having consistency also enables our guards to be familiar with and identify those who have previously been trespassed.''

''Shoplifting is a serious problem everywhere and Dunedin is no exception. Many places

have security cameras and security staff, which helps to deter some shoplifters,'' she said.

''If shopkeepers are suspicious of someone in their store, they should keep going up to them asking if they can be of help to them.''

Police spoke to stores about their security arrangements and would do more beat work especially around the George St area, malls and library during the period.

Otago Chamber of Commerce retail committee chairman Alan Preston said shoplifting was of concern to members. It increased along with increased foot traffic at this time of year, and employers and staff needed to remain vigilant.