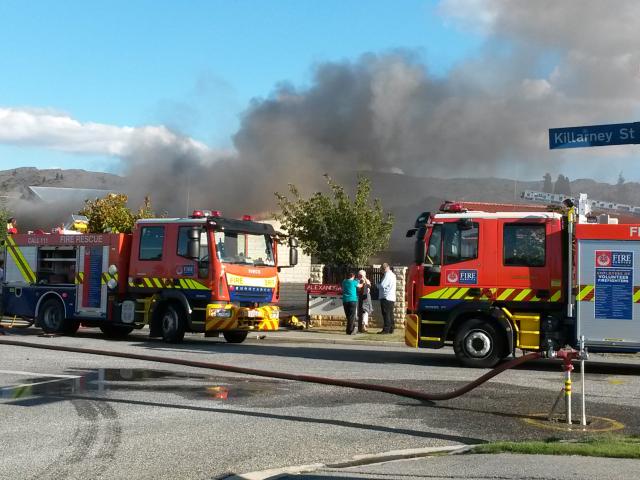 Fire crews are attending a house fire in Alexandra tonight.

There's a monkey loose in The Terrace School's room 3 but no-one is trying to catch him.

Vanuatuan workers in Central Otago are waiting for news from their home country in the wake of Cyclone Pam, but for now a support fund has been set up, an employment co-ordinator says.

If the Maniototo community wants to object to a decision to move its library, it should make a submission to the region's long-term plan, Central Otago's mayor says.

Vanuatans working in Central Otago yesterday thanked the wider community and in particular their employer for support in the wake of Cyclone Pam.

A proposal to open up what are thought to be unmarked graves in the Ida Valley to find out more about Central Otago's pioneers has already struck some controversy.
In 2013, a report by an archaeologist identified almost 800 possible unmarked graves in Central Otago.
The Maniototo community is to make a show of support for keeping its library in the present location at a meeting next week.
A crash in the Cromwell Gorge near Clyde yesterday morning was caused when a driver of a utility failed to give way, police said.

One of the best parts of the 2015 Otago Goldfields Cavalcade has been, for an organiser at least, the actions of first aid providers and emergency response.

A decision to proceed with the sale of St Michael and All Angels Church in Clyde, one of two Anglican churches in the Dunstan Parish for sale, was based on pragmatism, the Dunstan vicar says.

An accident involving a tractor has resulted in a patient, believed to be male and with serious head injuries, being airlifted to the Dunedin Hospital this evening.

A 25-year-old Alexandra man is in a critical condition in Dunedin Hospital after falling from a van travelling at 100kmh, police say.

The rain has fallen, the call has been made, and the Otago Goldfields Cavalcade will ride on.

A much-anticipated underpass on State Highway 8 at Clyde seems set to be built by the end of June.

Police have named the Alexandra man who fell from a van travelling at speed through the Cromwell Gorge.

A flame from a beekeeper's smoker started the fire which burnt 142ha of an Ardgour Valley property, the farmer says.

Cromwell residents are angry about the amount of weed in Lake Dunstan and two men believe its presence is ruining the waterway for users.

The New Zealand Transport Agency has $1.6 million worth of bridge strengthening work under way, or about to, on highways in Central Otago and the Queenstown Lakes district.