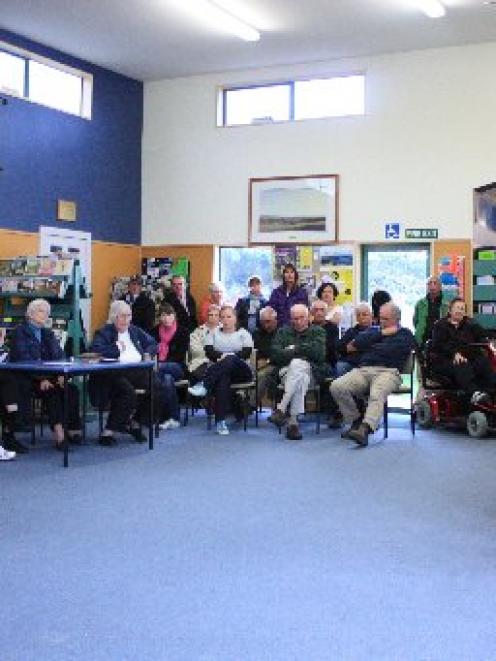 A group of Maniototo and Ranfurly residents listen to Central Otago Mayor Tony Lepper at a meeting about the future of the Maniototo Public Library. Photo: Leith Huffadine
If the Maniototo community wants to object to a decision to move its library, it should make a submission to the region's long-term plan, Central Otago's mayor says.

At a meeting in Ranfurly yesterday, Mayor Tony Lepper defended the Central Otago District Council decision to move the library from where it shares facilities with the Maniototo Area School to the council service building in the town.

The school's board of trustees and community board chairman Mark Harris had already called for a review of the decision in which neither group was involved. About 100 people attended the at times heated gathering in the present library, which had been called to express public concern over the decision-making process, the decision itself, and to show support for a review of it.

Organiser Amie Pont opened by saying the community wanted to be involved in decisions which affected it.

Mr Lepper said because libraries in Central Otago were funded by ratepayers throughout the region, it was a council decision, not a community one.

The decision was made in a closed council meeting because it involved council staff.

The joint library had worked ''really, really well'', but it had reached a point where it was unaffordable, he said.

Shifting it followed a council model to centralise services which had worked well in Roxburgh, and would allow facilities to be brought into line with other libraries in the region, he said.

Mr Lepper reminded people the library was only moving a short distance and there was no reason why the space at the school library could not continue to be used by other groups.

Maniototo ward councillor Stu Duncan came under fire from some at the meeting about his representation of the community wishes during the process.

Cr Duncan said he had tried to explain their views, but he was only one councillor among 10.

During the meeting, frustration on both sides was apparent. Many of the public's concerns were operational matters regarding the library which Mr Lepper did not have the information to answer.

Mrs Pont closed the meeting by encouraging people to submit on the long-term plan regarding the library.

A petition started on Friday to gather support for the library remaining in its present location had gained about 300 signatures yesterday afternoon. Mrs Pont said it was likely the petition would be attached to a submission to the council.