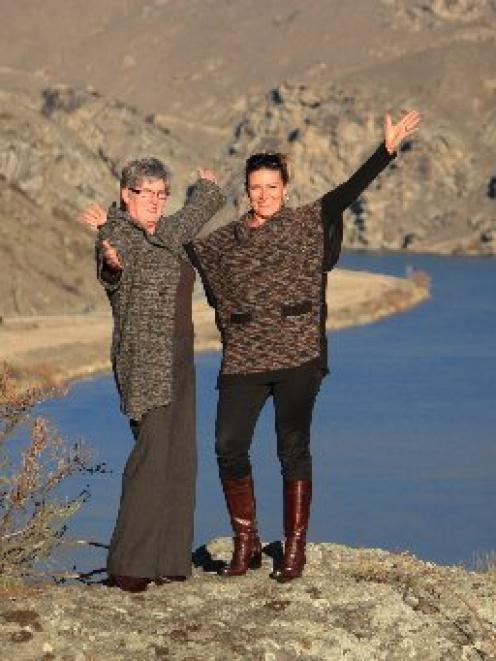 Cromwell and District Community Trust secretary Janeen Wood (left) and chairwoman Jacqui Rule at the Goldfields Memorial in the Cromwell Gorge, celebrate the release of a feasibility study outlining the viability of developing of a cycle trail in the gorge. Photo by Leith Huffadine.
Remote, arid landscapes, lake shores, rock bluffs and gold mining history, tunnels and sheep farms.

These are just some of the attractions that would be accessible if a Lake Dunstan cycle trail was built in Central Otago.

The trail, given the nod in a feasibility study released in part to the Otago Daily Times yesterday, would cost about $5.7 million, and stretch between Cromwell and Clyde, on the opposite side of the lake to State Highway 8 in the Cromwell Gorge.

Construction of the proposed 40km trail would provide benefits such as a $1.4 million yearly contribution to the region's economy, and the creation of 13 full-time jobs, within five years.

Cromwell and District Community Trust chairwoman Jacqui Rule said the group, responsible for commissioning the study, was excited about the outcome.

''It will help link together all the other [cycle] trails in the region, and create a network ... just imagine it. It will be so good.''

The Central Lakes Trust provided about $74,000 for the study, and expertise and advice came from the Central Otago District Council.

Trust secretary Janeen Wood said without the trust's contribution, the study would never have happened.

''It's just magnificent to finally see a feasibility study, and to be able to tell people about it. [I'm] very happy.''

Mrs Rule said the next step would be to establish a trust to manage planning and development of the trail.

The trust would be responsible for issues such as gaining consent and fundraising for construction costs.

Developing a trail in the Cromwell Gorge was proposed during the first Cromwell Community Plan in 2008.

Further details about the trail would not be known until the study was released in full.