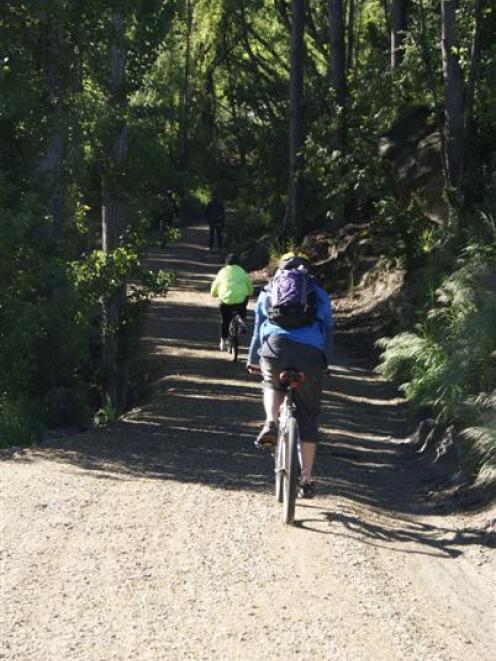 Cyclists explore the Roxburgh Gorge trail. Photo by Sarah Marquet.
The Millenium track, between Clyde and Alexandra, the Roxburgh Gorge Trail and the Clutha Gold Trail are being seen by many cyclists as a package deal, Clutha trail trust chairman Rod Peirce says.

''There seems to be a lot of people doing both trails and ... there seems to be an association with the Clyde river trail [Millenium Track], the Roxburgh Gorge and Clutha Gold trails - it's almost like a Clyde to Lawrence trail.''

The Roxburgh Gorge trail, between Alexandra and the Roxburgh dam, and the Clutha Gold trail, between the dam and Lawrence, were officially opened on October 24 last year and were experiencing ''heavy usage'', Mr Peirce said.

The number of cyclists around Roxburgh and Millers Flat especially was ''phenomenal'' and anecdotal evidence suggested they were enjoying the trails.

Not everyone was opting for the boat trip across the middle section of the Roxburgh Gorge Trail - many were choosing to do the trails in segments, he said.

The 12km boat trip crosses the middle section where the trail has not yet been constructed because of various issues with three properties.

That could be about to change for one property though, Roxburgh Gorge Trail trust member Barrie Wills said.

The tenure review process of Obelisk Station was almost complete.

''Chances are that maybe we can get on with continuing the track later this year, but we'll have to look into fundraising.'Dr Wills said he had been on the gorge trail about once a week, tidying things up where needed.

That was usually midweek and he would see ''in excess of 30 to 40 people using it, so there would be a lot more in the weekends.

''I see people walking their kids in prams, a lot of bikers and a lot of walkers too.

''I've stopped and talked to a lot of people and they're just blown away.''

With no counters on the trails, exact numbers of users were unknown but the trusts were considering options to record usage, both men said.

They are looking to install cameras to not only capture how many people are using the trails but also age groups and other information about usage.

When asked how many $25 maintenance contribution tags had been sold, Central Otago District Council visitor centres manager Pam Broadhead said she was no longer able to supply that information as it was commercially sensitive, but the trusts would release that information after a meeting later this month.

Mr Peirce estimated between 500 and 600 had been sold and he would have a clearer idea after a meeting on Monday afternoon.