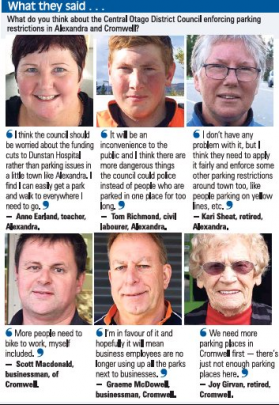 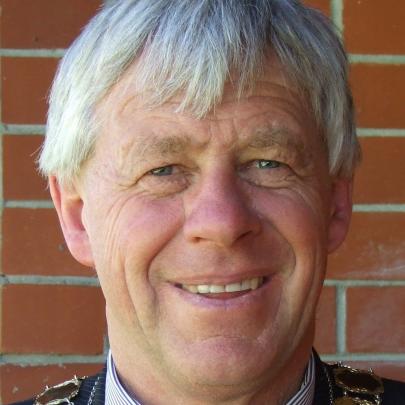 The ''honeymoon'' is nearly over for motorists parking in the central business districts of Cromwell and Alexandra.

The Central Otago District Council approved its roading bylaw last week which included parking restrictions in the two towns and allowed for the imposition of parking fines, ranging from $20 to $50.

Restricted parking zones were introduced in 2007 but the bylaw, which takes effect from July 1 allows for the enforcement of those restrictions.

Signs have been displayed since 2007 but no action has been taken to enforce the time limits. Town centre parks will have restrictions ranging from 10 minutes to two hours, depending on the location.

''Now we need an implementation plan for enforcement. We need to give it teeth and enforce it, or else what will we have achieved?'' Cr Neil Gillespie said. Central Otago Mayor Tony Lepper said there were several ways the law could be enforced.

''We could randomly enforce it, say every second Tuesday, or something along those lines.

''We wouldn't have to have a parking warden out there every day,'' he said. Roading manager Julie Muir did not anticipate it would be a ''big revenue generating exercise''.

The council agreed to consider a report on options for policing the parking restrictions by the end of next month, before the bylaw took effect.

The draft roading bylaw attracted 99 submissions, with a third focusing on the parking restrictions in Cromwell and Alexandra. Businesses in the towns had asked for the restrictions to be enforced, a submission hearing was told.

A wide range of topics are covered in the bylaw, from stock movement and alfresco dining through to temporary traffic management, roadside plantings and heavy vehicle restrictions.