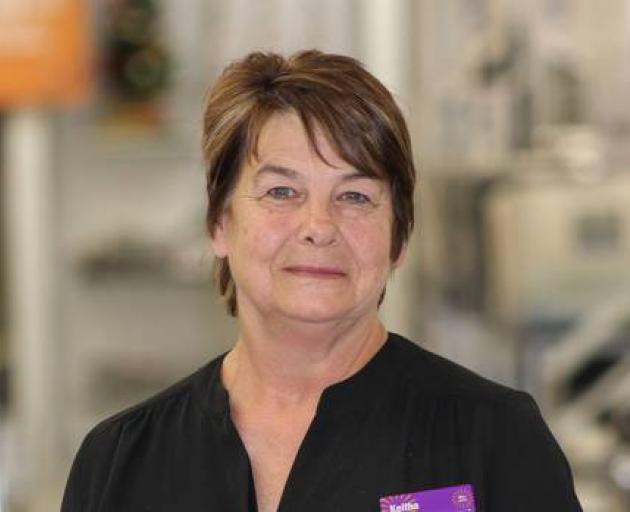 Keitha Lowe. Photo: David Haxton
At a function to mark the 50th anniversary of Coastlands Shoppingtown, in Paraparaumu, special mention was made of the longest serving staff member.

Keitha Lowe has worked in the shopping complex for most of those years in the Farmers department store.

She enjoyed the function, was humbled by the long service recognition, and enjoyed catching up with various people she had known over the years.

Keitha started in Farmers in Easter 1971, when it was located by the old main road.

"I got it through a friend who asked me to come in and help," she said.

"They were obviously looking for some extra staff because they were so busy.

"And then I did some stocktake and then they offered me a job on Saturdays."

By October 1973 Farmers had relocated into the mall and Keitha took time off to give birth to her daughter.

But she was back working at Farmers in April 1974 and has worked there for a continuous 46 years.

Over the years she progressed through the ranks and held various roles, including department manager.

"I have literally done every job in the shop.

"I was even storeman driver at one stage, when someone was on leave, and was out doing deliveries."

Her expertise has also been called on to help with new store set-ups in and around the Wellington region.

And people come from far afield to visit the store — not just for the products — but for the service too.

"And when you've been here for so long you jolly well should know.

"But I can do that pretty well anywhere in the store."

"She came in and said she wanted a house lot of stuff.

"I was wondering if she was for real because she said she had flown down from Auckland, had just bought a house that morning, and her husband was coming to work on the expressway.

"She was flying out of Paraparaumu at 4pm but just wanted to get everything for the house.

"I got a pad, walked along with her, and she pointed out to things she wanted — fridge, freezer, beds, lounge suite, rugs, everything literally for the house.

"I was writing all these lists and thinking is this for real.

Keitha, from Paraparaumu, remembers another busy time, this time in the early days, when Coastlands was one of the only places allowed to stay open on Saturdays.

"Christmas Eve one year fell on a Saturday and it was very hot.

"Everyone came to Coastlands and you could hardly move in the place.

"It got so hot that the sprinkler system went off in the Pied Piper gift shop, which was opposite Farmers.

"All the water was running out under the doors."

She said a popular thing for people in Wellington to do on Saturdays was "to come up to the Hot Bread Shop, which was down in Ihakara St, come to Coastlands, and then go to Copperfield for an icecream and go to the beach with it".

Throughout the years Keitha has seen various technological changes including the popular Farmers card.

"There was a time when the Farmers card was bigger than either Mastercard or Visa.

"More customers in New Zealand had a Farmers card."

There has also been some anxious moments including the Kaikōura earthquakes which impacted on the store.

"We had just renovated but had to close for three weeks after the earthquakes."

Having friendly work colleagues and a flexible work environment was important.

"I've got staff that I still keep in touch with, that I worked with years ago, we catch up for coffee or dinner."

She was proud of how Farmers had stayed strong over the years.

"Farmers is actually the only true department store in the country."

And Keitha continues to have a spring in her work step.

"I can honestly say, in all my years, I have never been bored and have always enjoyed my job."