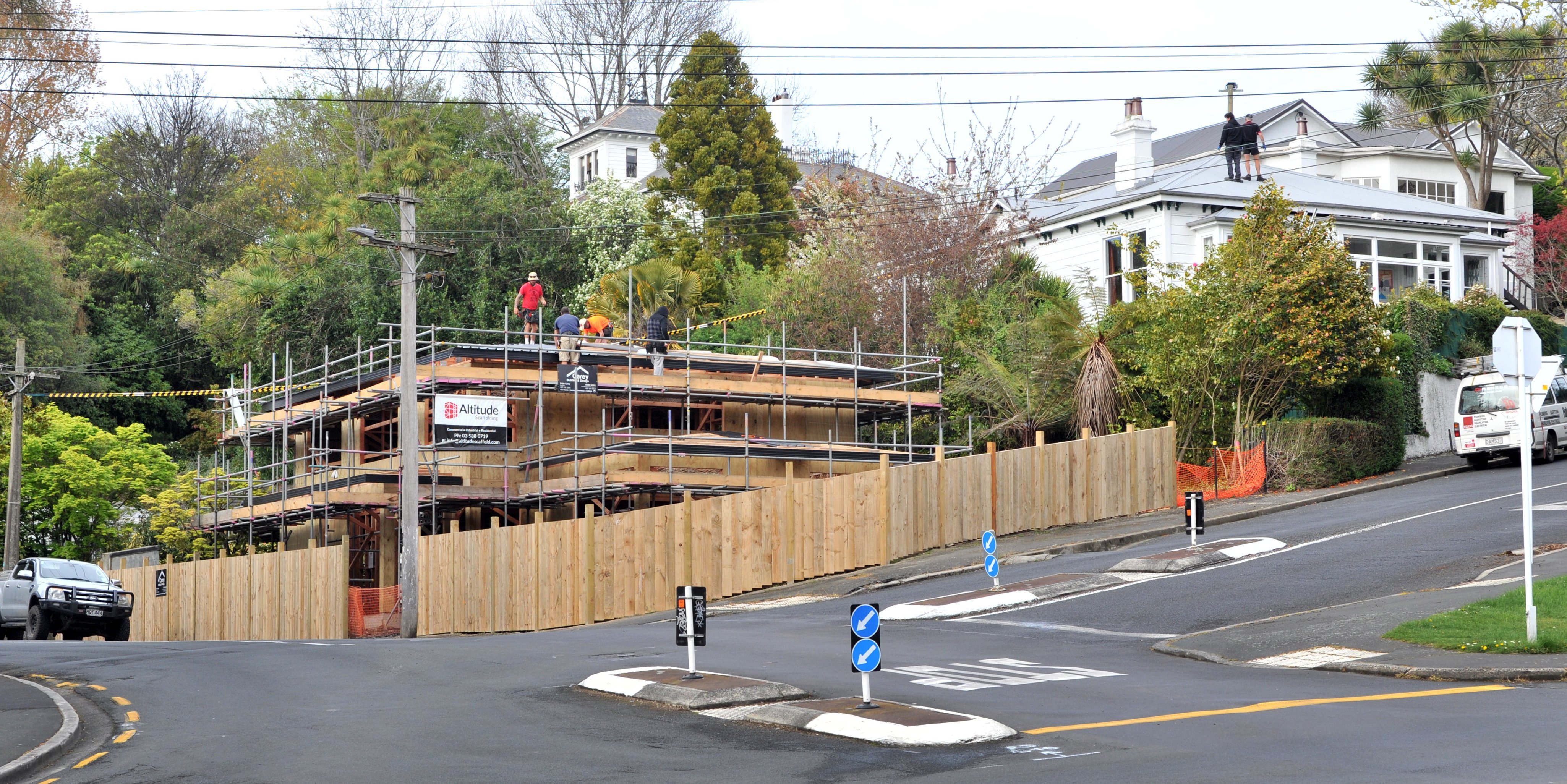 Builders work on a new home on the corner of Meadow St and Queens Dr, in Mornington, last week. PHOTO: CHRISTINE O’CONNOR
Builders are concerned about the time it is taking to process building consent applications, during what the Dunedin City Council has described as a record year.

The Combined Building Suppliers co-operative (CBS) wrote to the ministers of construction, housing and local government last week, on behalf of 670 builders it represented, calling for urgent intervention.

When contacted, Dunedin builder Grant Hope-Cross said longer waits for consent approvals were to be expected.

His issue was the questions or requests for information (RFI) the council came back with which delayed the process.

Mr Hope-Cross recently submitted a consent application and received questions he believed were clearly answered in the plans.

Every time the council came back with an RFI, it added an extra 20 working days to the application.

Usually building inspectors would visit to the site within a couple of days but, at present, it could be up to two or three weeks, Mr Hope-Cross said.

The consistent delays were making it "incredibly hard" to plan and added extra pressure to an already struggling industry, he said.

Jimmy Simpson, another Dunedin builder, applied a consent for a house nearly two and a-half months ago and it had still not been approved.

"It is definitely taking longer than it should, I think," Mr Simpson said.

"It will come right eventually. It just means we have to be a bit more organised," Mr Simpson said.

DCC general manager customer and regulatory Claire Austin said the figures were a great sign of confidence in Dunedin, and a welcome boost for economic activity, but the flood of applications did have flow-on effects.

“There’s no doubt our Building Services staff are busier than they’ve ever been.

“Delays caused by the Covid-19 lockdown, which prevented our staff from carrying out building inspections, certainly haven’t helped. Neither have ongoing material supply problems nationwide, which are only compounding scheduling issues for our inspectors.

“That said, we’re pulling out all the stops in an effort to catch up on the backlog,” Ms Austin said.

The council aimed to issue a building consent within 10 working days and was required by law to do it within 20 working days.

However, at present, applications were taking 15 working days on average to process.

Building inspections were also taking longer than usual to carry out due to the backlog and increased demand.

The council aimed for two to five working days but it was currently taking about nine days, Ms Austin said.

Several builders in the Queenstown Lakes District Council (QLDC) said they were not experiencing any issues with the QLDC.

CBS chairman Carl Taylor said in Christchurch consents were taking about 57 days, rather than the standard 20.

He said the delays were causing major impacts to residential construction productivity.

The problem is that the council has little real incentive to improve.
There should be a financial reward to every council for every application properly reviewed and approved on time (some suggest giving the council some of the GST revenue for each approved build); and conversely a financial penalty (i.e. a partial refund to the applicant) for every delayed application.

Is anyone working at DCC at the moment? Hardly anyone in the main reception and trying to get through on phone is a non event.. what an excuse for doing nothing Covid offers..