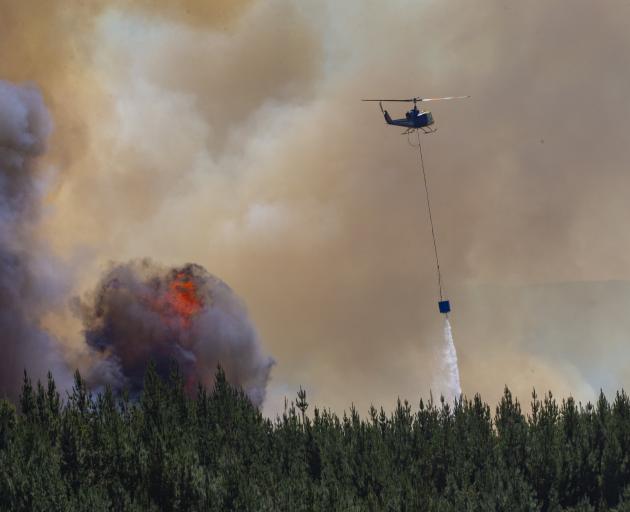 City Forests in Dunedin has closed its forest estates to the public because of the extreme fire danger; pictured, a helicopter and monsoon bucket fighting the Nelson fires 10 days ago. Photo: New Zealand Herald
Extreme fire danger has prompted City Forests to close its estates to the public and staff and contractors are working restricted hours, probably for several weeks to come.

''There's a lot of grass out there now which is fuel,'' he said.

City Forests' staff and contractors were ''largely'' working full days, but starting at 4am and having to be out of the forestry blocks by noon, and then spending some time on ''fire watch'' duties, he said.

Dunedin City Council-owned City Forests has about 17,000ha of forestry blocks on 20,000ha of land, mainly around Otago.

Mr Dodson said horse riders, hunters, walkers and motorcycle riders were all affected by the closure.

''We've had high levels of extreme fire danger during the last couple of weeks, with the humidity-temperature crossover ... at dangerous levels,'' he said.

He expected it would be ''several weeks'' before temperatures and more rainfall dampened the soil, which would allow public access to resume.

''You can see from the Nelson fires how easily a fire can start and then get away,'' he said.

Log production had been disrupted, as the logging trucks also had to work within the restrictions.

''It's something we expect from year to year,'' Mr Dodson.

Other than one small fire behind Sawyers Bay, Mr Dodson said there had been none reported on City Forests blocks.