Couple seek to reignite past industry for future

By Simon Henderson
1 Comment
Flax is being transformed into beautiful objects by the entrepreneurial efforts of Wanaka couple Monique Kelly and Alex Guichard.

Mr Guichard spent many years in the plastic injection and composite materials processing industry, including founding his own company in his home country of France.

He came from the ''dirty side'' of the industry, working with carbon fibre and fibreglass. 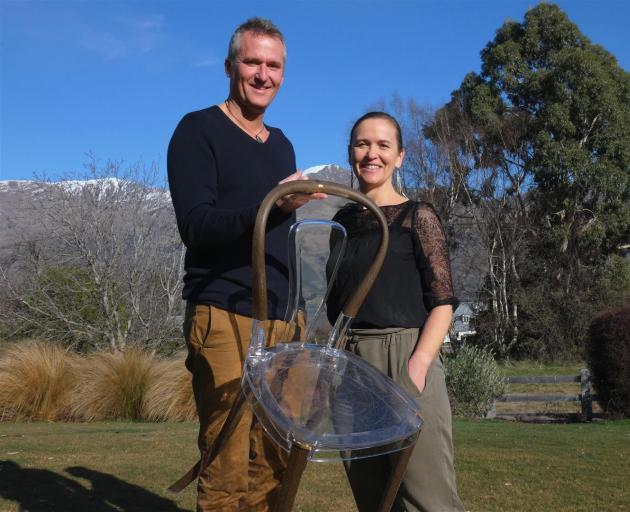 When he sold his company and moved to Wanaka, his thought was to find a more sustainable way to use his composite industry skills ''not using fossil fuel materials but using flax linen''.

The couple have called their company Revology, and their first product is a chair made from linen composite fibres with recycled brass and a seat made of a ''bio-based resin''.

Further products they were exploring included bicycles, suitcases and sunglasses.

They chose common flax because they could source it in sufficient quantities from a co-operative in Normandy, France.

''They have a zero waste policy and are very much aligned with what we are trying to do.''

In the future, there was the potential to use local materials including harakeke, New Zealand's native flax.

''We would love to be able to gather enough harakeke fibre to actually be able to do something here,'' Ms Kelly said.

Producing flax products locally could reignite an industry active across the country in the late 19th and early 20th century.

The demands of World War 2 gave rise to the New Zealand Government establishing the Linen Flax Corporation, which at its peak had 17 factories.

Products from linen flax including rope, fire hoses and canvas were needed for the war effort.

The first annual report of the corporation said it exported 7460 tons of fibre to the UK during the war years but the industry declined with the rise of synthetic materials.

With a growing interest in sustainability and natural products there was ''a really big opportunity'' for New Zealand to turn locally produced fibres into a ''technical material'' that could be used in many products, Ms Kelly said.

''There is huge scope for development with what we are doing.''

Harakeke, native flax, was ''one of the primary industries'' in Otago and Southland even before European settlement, Ms Kelly said.

''It was one of the primary fibres used by Maori to weave and make beautiful products and that know-how was then brought together with the industrial use of it.''

With a need to move away from synthetic fibres and the damage they caused to the environment there was ''a real opportunity to go back and see how we used to do things,''Ms Kelly said.

Flax was lighter than carbon fibre amd took only 90 days to grow from a seed into a mature plant, while a tree could take 25 years, Mr Guichard said.

Flax did not need irrigation and had good impact qualities which was useful for products such as a bike or chair.

Circular design was a focus for the couple, which meant a product could be easily fixed if needed.

''There is a huge responsibility to make sure we are putting products out there that are not programmed to break after five years,'' Ms Kelly said.

The chair was designed with separate parts that could be easily fixed with replacements, and broken parts could be returned and recycled.

''The idea is that we actually increase the longevity of all of the objects, rather than programming them to break just after the warranty finishes.''

NZ flax may not process to such fine fibers. It was highly prized by Royal Navy rope makers, not sure it ever went into fine linen garments