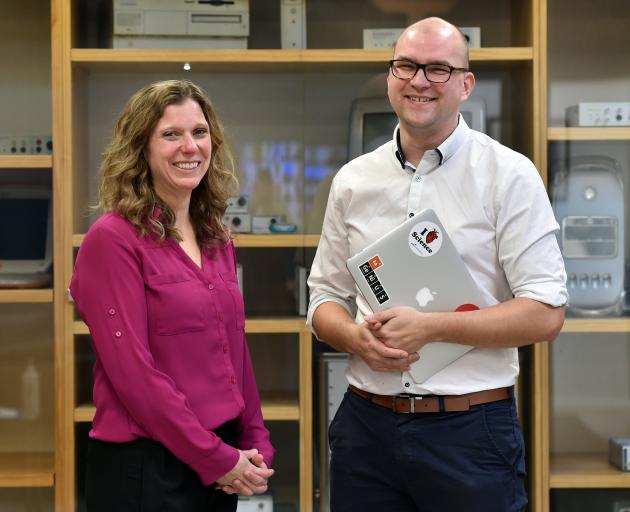 ADInstruments head of education Amy Bucher and the company’s head of marketing, Alex Black, talk about how they helped universities around the world navigate teaching online.PHOTO: PETER MCINTOSH
As Covid-19 spread in China and then through other parts of the world, a global business in Dunedin was ready for it. ADInstruments saw a massive increase in the number of universities using its online software. Jacob McSweeny looks at how it did it.

Staff at ADInstruments in Dunedin watched as their colleagues in the company’s three offices in China went into lockdown.

The American universities came next — a group that make up 35% of the company’s client base.

"We saw the effects of the pandemic very early," ADInstruments head of marketing Alex Black said.

It was March and "spring break" was approaching in the United States. Many of the universities told students not to come back and that it would be the end of face-to-face teaching for a while.

"That’s when we said all right, we need to do something," ADInstruments head of education Amy Bucher said.

ADInstruments would have to move with their clients. Their typical clients are medical schools and other departments such as nursing schools and some of the sciences.

"The problem that our customers were facing is the majority of them were still running laboratory-based experiments, where students would come into a physical laboratory ... they’d do experiments on themselves in groups," Mr Black said.

"Often those laboratory sessions would be used as part of the students’ grade for the year as well."

Suddenly the universities were closing down and that created a big problem because students were not able to engage in what had been their standard way of learning in the classroom. 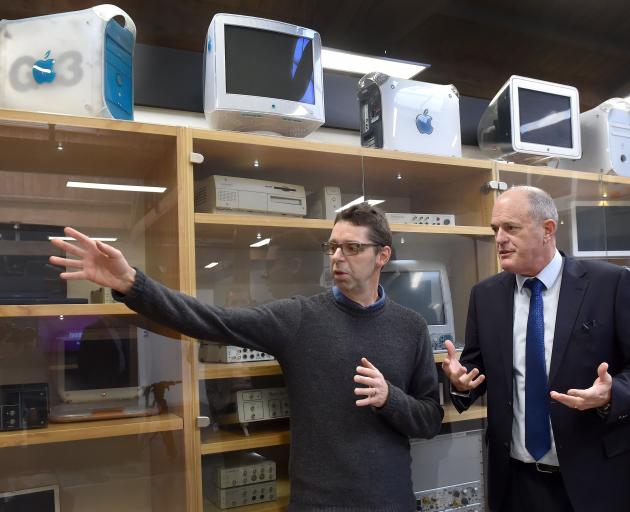 ADInstruments founder and director Michael Macknight speaks to then National leader Todd Muller on July 7.PHOTO: PETER MCINTOSH
They also could not and would not be able to get the grades they usually would.

ADInstruments then ramped up its online learning software called "Lt". It allowed customers to access example data files. This meant teachers and students could access and upload data as if they had recorded it in their lab.

"We’d created that feature predominantly for if a student had made a mistake and couldn’t get some good data but later needed to analyse that data and answer some questions as part of that examinational grade.

"You ... could override it and put some example data in."

During the pandemic this was the perfect feature to allow students to record data from experiments and share it with their teachers. They did not need to be in the lab together.

ADInstruments then made some modifications to the online lessons and opened the software up for free to any university or department that was running laboratory-based experiments to use the lessons.

"Many people taught with that and used this example data and got their students to simulate recording data and then answer questions based off data," Mr Black said.

This required some hard work at the company’s headquarters in Vogel St, where a 50-person task force was established to make it clear to clients what was on offer and to reach out to other universities that might need it.

"We were about two weeks behind here[in New Zealand] ... it was pretty much a mad rush in order to make the product ready for it and to push it out live, globally," Mrs Bucher said.

"We pulled about 14 days of straight work from 8am to 8pm, probably, to get that material ready," Alex Black said.

"A lot of them have been saying ‘Oh this is great because all of our members have been contacting us and saying how on earth will we do this’," Mr Black said.

"A lot of the societies promoted the offer too and we pretty much immediately saw some explosive growth in terms of people using the product."

Within the first 24 hours of their improved learning platform’s launch, 400 to 500 individuals inquired about using Lt.

"To begin with we were signing people up manually," Mr Black said.

"Very quickly later we’d built an automatic system where people could go online and could get instant access to the software and sign up for a full account and select the content they needed."

That led to the number of university departments using Lt rocketing from 149 to 1850.

That figure did not include students that signed up and did not do much after that point. They were active students who had logged in and started completing lessons.

The company had no problems scaling the programme capacity up to deal with a large increase in students and teachers.

"We didn’t have any problems at all with that, which was quite nice," Mr Black said.

The company has about 200 staff worldwide and turns over $45 million in revenue each year. About 70 staff work in its Vogel St office in Dunedin.

ADInstruments is now moving with its clients again as universities around the world find ways to come back to the classroom where possible.

"... one of the big trends in education is a thing called blended learning," Mr Black said.

"There’s a concept called flipped classrooms, which is essentially where you get students to do work online before they come into a classroom in a laboratory setting or tutorial setting."

This meant teachers could tailor their classes off data from students doing the online lessons.

"They can learn some concepts, they can answer some questions and you as an educator can see ‘Oh, this is an area that they’ve struggled with quite a bit’. In your tutorial you might change your teaching to focus on that one area."

Those trends had been happening for a while but change could be slow, Mr Black said.

"The pandemic has actually allowed a lot of our customers to rapidly adopt some of this technology and new styles of teaching.

"It’s quite possible and there’s some really great resources out there to teach in this way."

When universities opened back up, Mr Black said educators would be able to "seamlessly" move back into the laboratory.

"The software is designed to work in lab with that equipment but also at home."

The company is now working on releasing a new product where its clients will be able connect scientific equipment directly into a computer via a USB input.