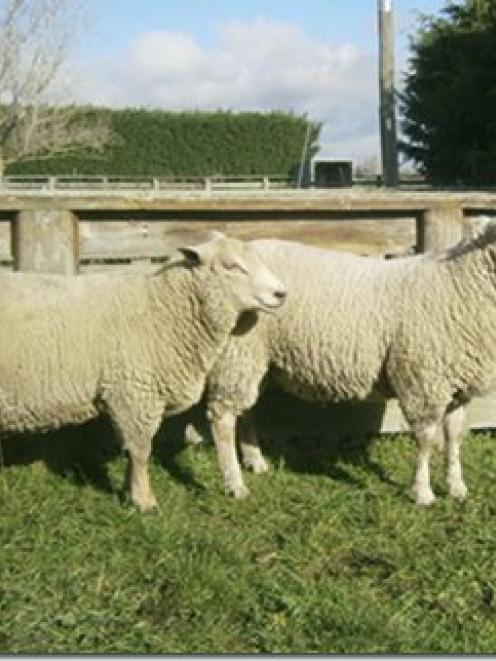 The Charollais sheep breed will be showcased at a ram open day at Cave next week. Photo supplied.
A breed of sheep little-known in New Zealand will be on display at a South Canterbury stud next week.

The Hampton family is showing Charollais stock at its Waterton stud at Cave on November 21.

Chris Hampton, who imported Charollais embryos from Australia in 2012, describes them as having the hindquarters of a Texel and the head and length of a Southdown.

He became interested in the Charollais after overseas farm exchange students sang the breed's praises. A Canadian and an Englishman both said it was the best meat breed in their home countries. However, this was shortly after the foot and mouth outbreak in Britain, so it could not be the source.

The Australian strain could be imported after three generations had been born there.

The Hamptons' ram open day will display two Charollais plus 11 Charollais-Suffolk crosses. They will be sending three Charollais, eight Suffolk and one South Suffolk to the Canterbury and Feilding Stud Ram Fairs.

They have been breeding Suffolk and South Suffolk sheep for decades, moving their stud from Mid to South Canterbury six years ago so they could rear their rams on the type of hill country where they are used. They are sold mostly to farmers in Central Otago, the Mackenzie Country, Rakaia Gorge and inland Kaikoura.

They were not ready for slaughter yet, but when they were they would be weighed and those figures related to their killing-out yields.

The Charollais lambs appeared small at birth but got straight to their feet and began suckling, Mr Hampton said.

''They are very vigorous when born.''

They were no different from other breeds in their survival rate.

''It's early days, but there could be a place for them in hogget mating.''

A Charollais ram entered in the 2011-12 central progeny trial was ranked 10th for growth rate and 30th for meat, finishing 24th overall from about 250 rams, Mr Hampton said.

A helmsman auction will start at Waterton at 4.30pm on Thursday next week, followed by spit-roasted lamb and refreshments.