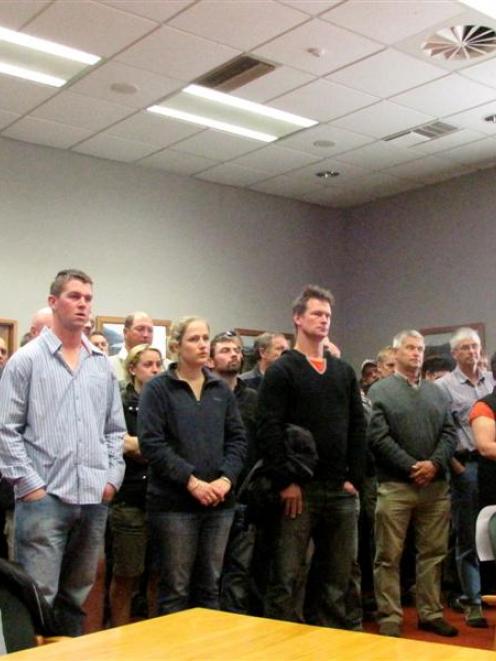 The interim dairy rule is a council initiative to improve water quality in Southland based on recommendations from the Office of the Auditor-general's report on water policy and the council's own State of the Environment report.

Federated Farmers Dairy spokesman Russell MacPherson said he was disappointed the council chose not to meet Federated Farmers over the proposal requiring all new dairy conversions to get a resource consent before becoming operational.

"Council can make the rules, you can police the rules, but without the people in the back of this room there will be no effect on the environment," he said.

The change, parts of which come into effect on April 14, is designed to counter the environmental effects of dairying on marginal land and to address the decline in the region's water quality.

"The main issue is it [new dairy consents] becomes a discretionary issue for the council," he said.

Federated Farmers National Board member David Rose said the draft plan was an excessive requirement which would have costs placed on farmers.

Farmers could lose millions of dollars from their investment as a result of the interim rule.

"Farm management plans are confidential documents between farmers and their advisers and should not be a matter of public record," he said.

Protesters were angry the council was using its recently acquired ability to impose policy it considered to be important before public submissions and consultation could take place.

"We wanted to engage with you [council] on whether we have this rule or not," Mr Fraser said.

Environment Southland chairwoman Ali Timms said there would be an opportunity for consultation in the submissions process, which was open until 25 May.

"We believe the council has broken the rules of democracy," Mr MacPherson said.

The protest was organised by Federated Farmers, whose ranks have split over the interim rule.

When Federated Farmers Southland president Hugh Gardyne spoke in favour of the rule, protesting farmers booed and walked out of the council chambers.

- Written by by Bruce Hitchcock.