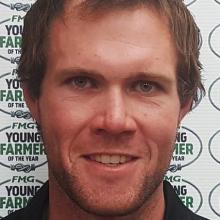 Alan Harvey.
Alan Harvey is looking forward to next month’s Otago-Southland regional final of the FMG Young Farmer of the Year.

He is one of eight regional finalists who will compete in the event in Roxburgh on February 18. The winner will go on to the grand final in the Manawatu in July.

Organisers have touted it as shaping up to be the toughest competition of the seven regional finals nationwide. Mr Harvey (25) was fourth in the Tasman regional final last year. Brought up on a sheep and beef farm in North Otago, he joined the Five Forks Young Farmers Club when he was 15 and was involved in setting up a club at Waitaki Boys’ High School.

He completed an agricultural science degree before taking up a graduate position with Agriseeds in Canterbury.

He held the record for being the youngest Federated Farmers arable chairman in the organisation’s history, chairing the North Canterbury section.

It was a "massive learning curve" but it was also too good an opportunity to turn down and, once he got into it, he thoroughly enjoyed it, he said.

Mr Harvey later shifted to Central Otago, where he is an agronomist with Agriseeds and a member of the Upper Manuherikia Young Farmers Club.

In his job, he covers a vast patch from the Waitaki River south and he enjoys meeting farmers and doing research and trials.

Farmers always had some "curly questions" for him and the role "definitely keeps me on my toes", he said.

When it came to this year’s regional final, Mr Harvey said he would like to be doing some more study for it but he would give it a good shot.

He had entered district finals a few times and the Tasman regional final was the only regional he had competed in. He had used the competition more as a learning curve in the past, rather than chasing success. When asked if he was more serious this year, he said he would "like to say yes" but it would all come down to how much study he got time for.

Mr Harvey, who won the Otago district contest and skills day, said the practical element of the competition was probably his biggest strength, and the theory side was the "difficult bit".

The Upper Manuherikia club was fairly new. It had good membership and held a variety of different events from barbecues to cricket games and training weekends — "all sorts of things".

Being involved with Young Farmers was an "awesome" experience, particularly for the networks created and the people he had met.

His interests lay around outdoor activities and he was a Search and Rescue volunteer and a keen hunter.

He has also been building a house from a shipping container as a "wee side project" and hoped to finish it soon and sell it.

He has lived in it for just over two years and while the first winter was "a little bit rough", it was "quite nice" now.

"Inside it, you don’t realise you’re in a container. There’s a lot of interest in it. It’s pretty cool," he said.

The house was fully portable, with the ability to unplug water, drainage and electricity, and it could then "literally be thrown on the back of a truck", he said.

Mr Henderson (30) is the only regional finalist nationwide to have competed in a grand final before. He was placed sixth in 2014. He won the Southland-Otago Dairy Industry Awards farm manager of the year in 2009 and sharemilker of the year in 2014.

Mr Kane was third in the Dairy Trainee of the Year award in the Otago Dairy Industry Awards in 2010, while Mr Wallace’s cousin Logan was fifth in the grand final last year.

● North Otago will be represented by John Mehrtens and Arjan Van’t Klooster in the Aorangi regional final, in Methven on February 25.Mr Mehrtens (30), who works on a 650ha dryland cropping farm at Waimate, is vice-chairman of the Glenavy Young Farmers Club.