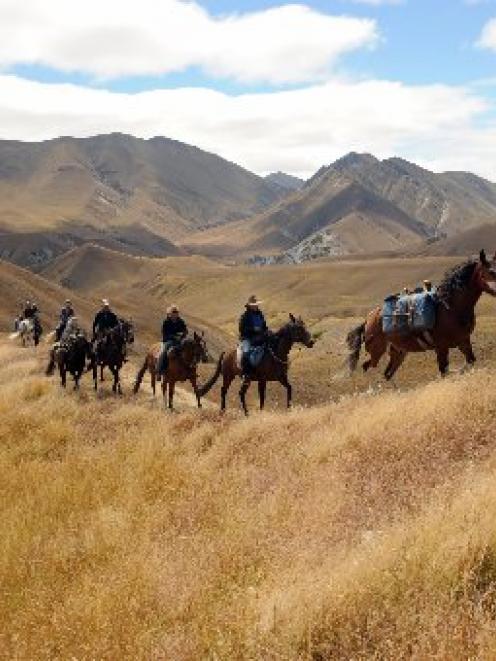 The High Country Pleasure Riders group, which was established in 1999 and is the largest horse-trekking club in the South Island, has made submissions to Doc's draft conservation management strategies in both Canterbury and Otago.

The club has an annual calendar of weekend horse treks throughout the high country, often traversing public conservation land.

In its submission, the group said horses played a crucial role in the early development of the South Island high country, moving freight, shepherds and their stock and other travellers via a network of remote tracks, long before roads were developed.

Riders valued the solitude and peace, passed through the landscape quietly and travelled at a walk, posing little risk to other user groups and causing minimal damage to the land.

The club's aspiration for the South Island high country public estate was that it was the ''greatest horse-trekking destination on earth'', providing unsurpassed recreational opportunities for individuals, clubs and commercial operators.

The group was willing to partner with Doc to help turn that vision into reality by providing detailed information about riding routes and volunteer labour to assist with the identification of pack tracks, erection of horse paddocks, horse track marking and maintenance.

Horse-trekking was a very popular and growing recreational activity ''and a part of our heritage, as is the conservation land that we access'', it said.

In particular, its vision saw the original pack tracks mapped so riders could find and use them.

Two areas of concern were changes in the Ahuriri and Ruataniwha conservation parks, where the group wanted the status quo for access to remain.

''Denying access to certain areas by activity unless a problem is proven is simply wrong,'' it said.

When contacted, a Doc spokeswoman said the draft conservation management strategies for Canterbury, Otago and Southland made horse access less restrictive than was now the case.

''These draft CMS's broadly provide for horse access to all conservation areas (not including reserves and national parks), only limited by topography and vegetation and some areas with sensitive environments (e.g. wetlands) or where there is potential conflict with other users.

''Currently, permits are required for this activity under the Conservation Act.

"However, the draft CMS's will allow this activity without permit,'' she said.

In the Ahuriri conservation park, the draft strategy confirmed access for horses on all access and four-wheel drive roads, up the Ahuriri Valley (avoiding wetlands) and the Snowy Hut and Hideaway Biv routes.

In Ruataniwha, access was provided for on the Hopkins and Dobson valley floors and Ben Ohau Range.