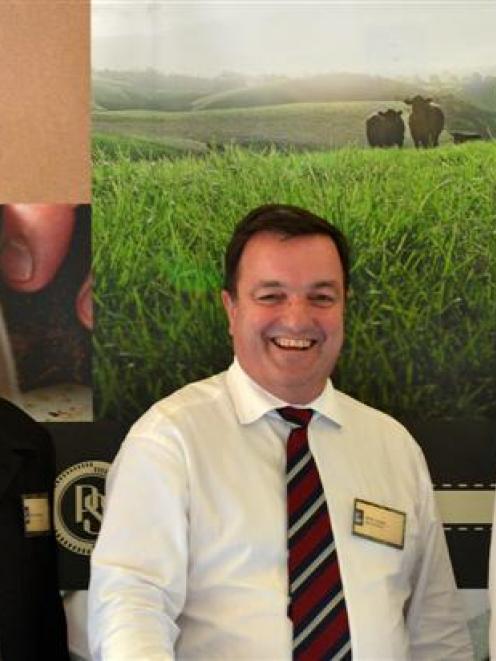 Silver Fern Farms chief executive Keith Cooper (centre) catches up with Marcus Glucina (left) and Justin Chen, from NZFocus, at a conference in Dunedin. NZFocus sells a range of New Zealand-made branded products into China. Photo by Peter McIntosh.
A Chinese delegation has been hosted by Silver Fern Farms in the largest-scale tour the company has run for customers.

Last week, 45 food industry customers, from a variety of food marketing and distribution businesses throughout China, visited farms of Silver Fern Farms' shareholders, and the co-operative's food production plants in both the North and South Islands.

The tour culminated in a conference in Dunedin on Thursday.

Last year, China became the co-operative's largest export market by volume exported and by value. It was a critical market and one that needed to be managed well and the tour was part of the approach Silver Fern Farms was taking to ensure it did just that, chief executive Keith Cooper said.

Dunedin's sister-city relationship with Shanghai and the city's strong links to the natural environment made it an appropriate venue for the conference, he said.

The co-operative's New Zealand branded retail range of lamb cuts will go on sale in Shanghai next month.