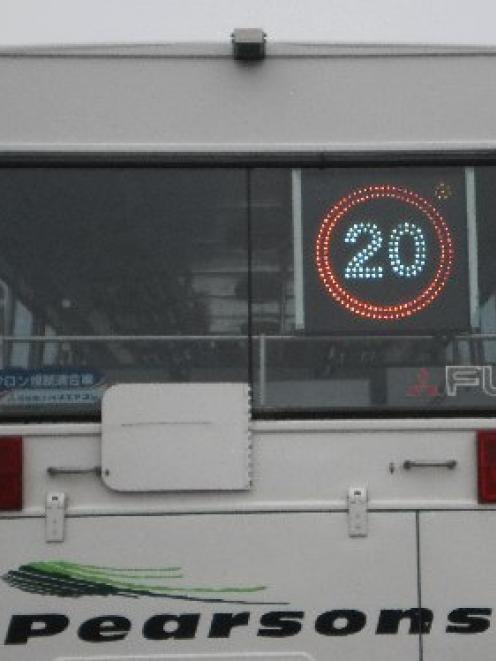 A Pearsons Coachlines bus displays a new speed limit advisory sign.
Mid Canterbury motorists will have no excuse for speeding past school buses stopped to pick up or set down pupils.

Special illuminated flashing lights have been fitted to the front and back of 30 buses operating in the Ashburton district as part of a national trial.

The signs carry the 20kmh symbol - the legal speed for passing a stationary school bus picking up or dropping off children.

They have been fitted to Pearson Coachline buses. Three types of signs have been used to cope with differing models of buses. Some signs are permanently mounted while others are on a blind which can be rolled away when the vehicle is not on the school run.

A recent survey found that more than 40% of motorists in the district were speeding past stationary school buses.

Ashburton has been chosen for a national trial because of its patchwork of long, straight roads and because of the support from the bus company and Rural Women New Zealand. The organisation has been campaigning for lights on school buses for several years.

An awareness campaign - ''Either way it's 20k'' - has been running in the district for the past two months.

Public awareness of the need to slow down past stationary school buses was low, as was evident in the survey, trial spokesperson and NZ Transport Agency safety co-ordinator Lee Wright said.

This would be common throughout New Zealand, she said.

She said if the trial was a success the signs would be approved as an option for use on school buses throughout New Zealand.

Speed data was collected before the signs were installed and will be collected throughout the trial through speed cameras on the buses.

The signs will operate until at least June 2014. Motorists will have a couple of week's grace before the police begin to actively enforce the 20kmh speed limit.