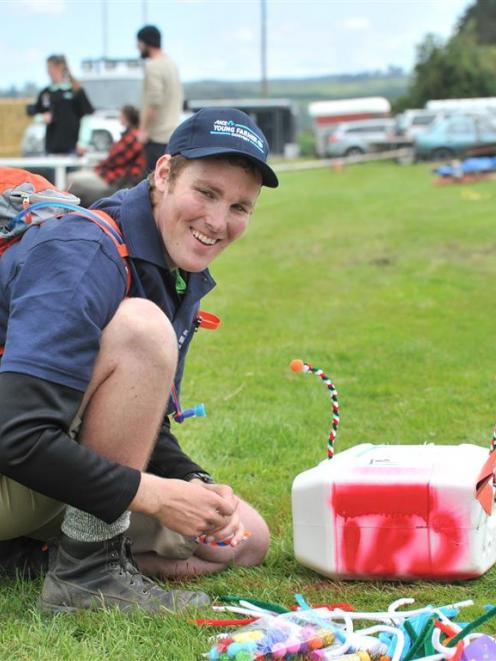 Eight years later, his dream has been realised following his recent victory in the Otago-Southland regional final in Wyndham.

A member of Clinton-South Otago Young Farmers Club, Mr Wallace (26) will now line up against the six other regional final winners in the grand final in Timaru in July.

He was "rapt'' to win, although there was no time to bask in the glory.

It was back to work dagging ewes on the South Otago farm on the Monday morning after the regional final.

It was the third time he has entered the competition.

He finished second in his previous two regional finals, and there was a strong incentive to go one better this year.

In his last attempt, he reckoned he pushed himself too much and started to make mistakes.

This time, he thought he would "sit back, relax and have fun again''.

That mantra also meant he kept a clear head and that paid off.

He found the Agri-Sport competition fairly gruelling, a very good event that pushed the competitors throughout.

It was also fairly physical, which was not his strength, but he pushed on, he said.

When it came to his strengths, he enjoyed the practical side of the competition and was "starting to get better'' at the theory questions.

Mr Wallace expected to put in a lot of work between now and the grand final, which would include quizzing various people and also getting people to fire questions at him.

He was looking forward to that, saying it would be a great learning experience as he found out more about his weaknesses and tried to "fill in the gaps''.

Mr Wallace grew up on his family's farm at Waipahi.

He then worked on a sheep and arable farm in South Otago for a year, as well as on a farm in the UK and harvesting in Western Australia, before returning to take over the lease of the 290ha family farm.

He was passionate about the sheep industry and believed it had the potential for a bright future, as it produced such a good product, he said.

His parents still lived on the farm and were able to help when needed and he expected his father was going to have "a fair bit more work to do'' over the next couple of months. Friends from Young Farmers had also offered to lend a hand.

Mr Wallace had a clear goal in mind for the grand final - to win - and he intended to give it his very best shot.

"There's no point going there if you're not going to try for it,'' Mr Wallace said.

He encouraged other young people to get involved and make the most of the opportunities offered.

The Clinton-South Otago club holds monthly meetings, usually attended by between 10 and 15 people.

On May 28, the club is hosting its biennial ball, a fundraiser for the club and for a scholarship it presents to further higher learning and leadership in the Clinton and wider Clutha districts.