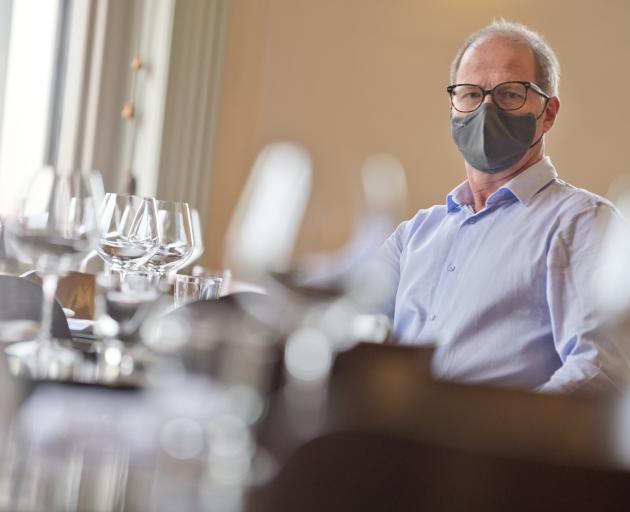 Bacchus Wine Bar and Restaurant owner Stephen Hannagan, of Dunedin, believes a drop to Alert Level 1 is the right thing to do. PHOTO: GERARD O’BRIEN
Southern businesses are unsure why the South Island is still at Alert Level 2, saying it is causing "frustration and confusion".

Under Alert Level 2 restrictions, businesses could operate with strict restrictions such as limits on visitor numbers, physical distancing, use of face coverings and record-keeping.

The flow-on effect for businesses in sectors like retail, hospitality and tourism was significant. Businesses were not getting the volumes of consumers to sustain operations, Mr Collins said.

Dunedin’s Bacchus Wine Bar and Restaurant owner Stephen Hannagan said there had been no cases in the South Island for months so it made sense to drop to Alert Level 1.

"We’d like to think that would be the right thing to do now," he said.

Alert Level 2 had put limitations on how Mr Hannagan’s business could trade but he believed it had adapted well.

While business had been reasonable during Alert Level 2, it was time to drop a level, he said.

The restrictions were having a big impact on Katrina Toovey’s two Dunedin establishments — No7 Balmac and Esplanade.

Mask-wearing was "pretty draining" for staff and the social distancing requirement meant a lot of tables could not be used, reducing the restaurants’ capacity.

However, with the uncertainty in the North Island around the Delta strain of Covid-19 and its potential to spread to the South Island, Alert Level 2 was good for now.

"If the Delta strain ends up here, we don’t want to go from Alert Level 1 to Alert Level 3.

"We’d love to be in Alert Level 1 but we’d also like the rest of the country to be there as well," Ms Toovey said.

Social distancing and cleaning requirements were affecting productivity levels and there were delays in receiving freight.

"We certainly would like to get back into Alert Level 1, it would definitely make a difference," Mr Evans said.

Auckland remaining in Alert Level 3 was also having a big impact because subcontractors could not travel and there were problems getting product out of the city.

.. and when Delta hits the South Island we can all blame Arden's team for not protecting the region. I choose Health over business.