Dunedin Railways' Silver Fern Railcar, heading south past the Garden of Memories in Oamaru. PHOTO: SUPPLIED
Dunedin Railways will be ratcheting up its wages to a baseline of $21.15 per hour and higher paid staff members are taking a hit to help make it happen.

The Dunedin City Council (DCC) controlled rail company - operator of the Taieri Gorge, Seasider and Silver Fern railcars - has reached agreement with the rail and maritime transport union (RMTU) and will be pushing its baseline wages for union members to the living standard of $21.15 per hour.

Union members represent about half of the railway's workers, about 70 during the busier summer and cruise ship season.

In terms of the agreement, higher paid staff at the local railway have agreed to forgo any pay rises for the next year to accommodate the increases.

The deal is backdated to early August. 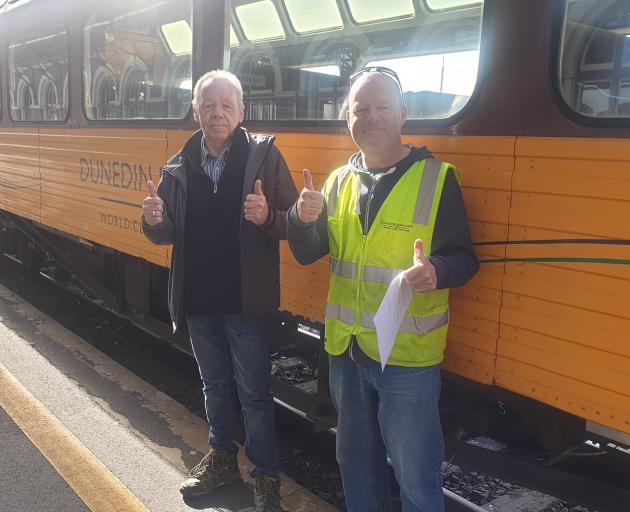 Rail and Maritime Union delegate Julian Evans (left) with train assistant Paul Jeffrey, whose hourly wage has just increased from $17.70 to $21.15 after 30-years service with the railway. PHOTO: RMTU

Rail and Maritime Transport Union (RMTU) organiser John Kerr described the pay deal as "groundbreaking'', in that it meant an increase of 18% for the lowest paid members at the railway.

"This is a significant pay deal for those who need it most," Mr Kerr said.

"Dunedin Railways is a great little railway that brings a lot of tourism into the city but in these challenging times  hasn't made much money.''

Dunedin Railways CEO Craig Osborne said it was a positive result for both parties.

"We presented our offer and the union was receptive to structuring a deal around that to the benefit of its lower paid members.''

Mr Kerr said about a third of members were paid below the living wage, so this agreement gets everyone to that rate "as a minimum.''

"It's a good news story for our members, the employer and the city of Dunedin.''

Mr Osborne said the railway was looking forward to a positive season on the strength of expected increases to tourist numbers.

Another black-hole/ loss making company of the DCC, paid by ratepayers. The DCC group seems to have become the 3rd biggest Dunedin employer after the Uni and the Hospital. Note, ALL 3 are paid by you, directly or indirectly. As productive private enterprises loose out to the tax and spend crowd. Remember these 3 employees do not pay net taxes- they receive their pay from private sector workers.