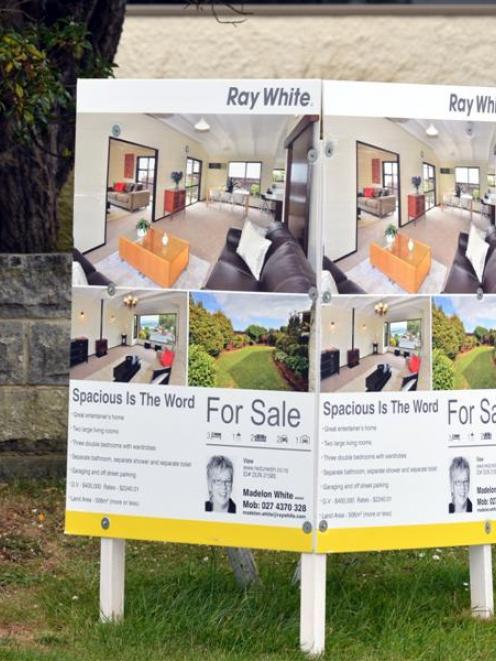 Reserve Bank lending restrictions have resulted in house sales falling. Photo by Peter McIntosh.
The Reserve Bank's intervention in the New Zealand's housing market is set to continue, as banks comply with the new loan restrictions and the loan-to-value ratio (LVR) is ''working well overall'' to cool the housing market, the central bank says.

Evidence of the actual effect on the housing market remains anecdotal.

House prices are up and sales figures down, but the banks are complying. Their high-LVR lending is down to 6.7%, on average, from almost 30%.

Introduced on October 1, the Reserve Bank LVR requires banks to limit their lending to borrowers with less than 20% deposit to no more than 10% of their lending portfolio, to mitigate exposure in the event of another property crash.

The contentious LVR was seen to be putting first-home buyers' aspirations even further beyond reach.

An outcry from franchise home builders prompted the Reserve Bank to exempt new-build homes in December.

In the Reserve Bank's bulletin yesterday, Lamorna Rogers, adviser in the macro financial department, said the housing market ''seems to be slowing'' and ''the LVR restrictions appear to be working well overall''.

''LVR restrictions are not a permanent tool, and the Reserve Bank is continuously monitoring their impact,'' she said.

Real Estate Institute of New Zealand data for February showed the national median house price up 8.6% but sales numbers down 7.6% for the month, compared with a year earlier.

Ms Rogers said that while the LVR was temporary, to restrain housing demand while there was a supply issue, the imbalance would have to be resolved in longer-run policy measures, including action to improve housing supply.

In mid-February, the Reserve Bank moved the interest-driving official cash rate (OCR) for the first time in more than three and-a-half years, by 0.25 basis points to 2.75%, to dampen inflationary concerns, signalling its intent to impose several rate hikes over the next 24 months.

ASB economist Christina Leung said the Reserve Bank had acknowledged recently the LVR could compensate for some of the work of raising the OCR, potentially slowing increases.

She said that while house prices had eased, even before the introduction of the LVR, it was the lower end of the market where sales numbers declined, while ''the impact on [house] prices has been muted''.

Ms Rogers said with housing making up more than 50% of all bank lending in the country, the surging house prices, particularly in Auckland, were ''judged to be contributing to an increasingly overvalued housing stock''.

She cited International Monetary Fund and OECD reports it was overvalued by about 25%.

She said that in the first half of 2013, the proportion of high-LVR lending by banks was ''worryingly high'' at almost 30% of their portfolios.

Given that well over half of New Zealand household wealth was held in the form of housing, and that household indebtedness was already running near record highs, the ability of an indebted household sector to withstand a major decline in house prices was a serious concern, she said.

She said that before implementing the LVR, the Reserve Bank had become increasingly concerned of the risk of a ''hard landing'' of the property market, the resilience of borrowers and, ultimately, the country's banking system.

''Expectations that house prices would continue to rise also seemed to be becoming increasingly embedded, raising the risk of self-fuelling credit and house-price rises,'' she said.