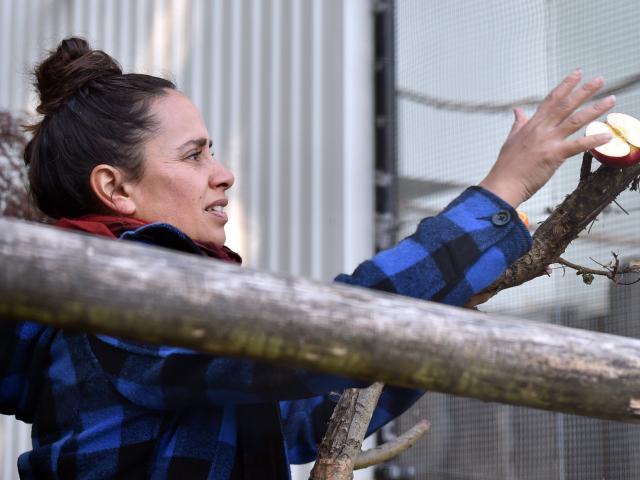 The birds at the aviary, including a kaka, pictured enjoying fresh apple, are being fed every day by staff because it is deemed to be an essential service.

A Downer contractor water-blasts the spillway at the Ross Creek Reservoir yesterday.

The Brighton Club's 23rd annual fishing competition will be held on Friday.

The Reserve Bank's intervention in the New Zealand's housing market is set to continue, as banks comply with the new loan restrictions and the loan-to-value ratio (LVR) is ''working well overall'' to cool the housing market, the central bank says.

Celebrated Coromandel potter and clay artist Barry Brickell is delighted to be back in Dunedin and his passion for various kilns, fires and gasworks is undimmed.

Canadian scholar Prof Michael Burgess, has highlighted the ways in which a ''deliberative engagement'' approach can help build greater community trust over the use of powerful new technologies.

The resignation of Ricki Herbert from the Phoenix can only benefit the national side, the boss of New Zealand Football believes.

Jandals, thongs, flip-flops ... Call them what you will, but they will be marching out in force today in a promotion to encourage people to wear jandals to show support for surf life-savers.

It will be spectacular - and there could be a few spills and thrills.

There's a fine line between working too hard and having a stress-free life.

Ravensbourne School pupils show their appreciation for Otago rugby, netball, football and basketball representatives who shared information about their sporting heroes at a champions breakfast yesterday.

What most people discard before eating chocolate, others turned into runway-worthy garments for Cadbury Couture in Dunedin last night.

Tickets went on sale yesterday for the only All Black test in the South Island this year with a scheme being organised to get those from Canterbury south for the big game.

Dunedin's former chief post office appears unlikely to be ready as a four-star hotel in time for next year's Rugby World Cup.

After years of battering from the sea, the precariously located sandhill at Middle beach, Dunedin, is suffering from a rear-guard action - a pounding by wind and rain.