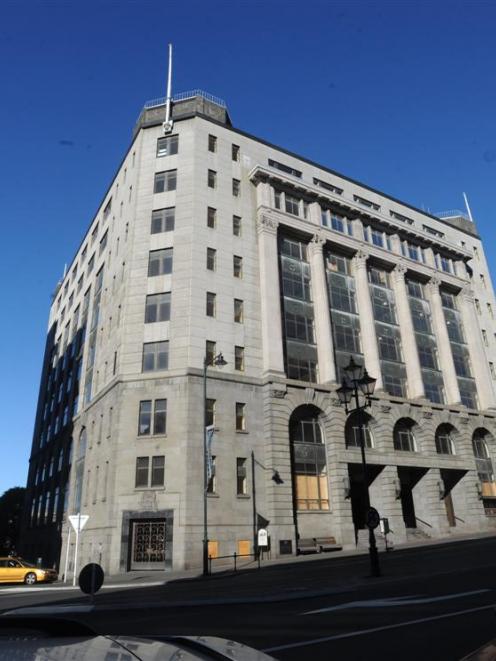 Three months after being purchased by Distinction Hotels owner Geoffrey Thomson, of Invercargill, the building's exterior remains battered, boarded-up and in need of much work, as does the interior.

When contacted yesterday, Mr Thomson confirmed work inside the building was yet to start, and he had doubts the conversion would be complete in time for next year's expected influx of rugby tourists.

"At the end of the day, the world cup is only a small window of opportunity."

However, Mr Thomson insisted the project would "definitely" still proceed, although he would not give a timetable.

Mr Thomson snapped up the building as the Dunedin City Council was investigating a plan to house the Dunedin Public Library and Otago Regional Council headquarters in the building.

At the time, he said in a press release - issued by the council - he planned to complete the hotel in time for next year's tournament.

Yesterday, Mr Thomson said the claim was a "tongue-in-cheek comment to someone" at the time.

"If it doesn't [open in time for the RWC] it doesn't overly worry me. You can't build a business of that size just for two or three weeks."

Council staff are still waiting to hear more from Mr Thomson about his plans, with no applications for consents received.

"If you look at the amount of building going on around the city, he might struggle."

The building had an existing resource consent for a hotel development, dating back to previous failed attempts to develop it, he said.

However, additional building consents would be required and no applications had yet been received, he said.

Mr Thomson said he planned to use the existing resource consent - which was not due to expire for about 18 months - and build within what it permitted.

He would meet council staff in coming weeks to discuss building consents and other matters.

Engineering and design work was under way, and the completed four-star complex would feature a gym, spa pool and sauna and other features, as well as 165 rooms - down from initial plans for 182 rooms.

Asked how big the construction challenge would be, Mr Thomson was succinct: "Huge".

"But in saying that . . . it's still a beautiful building. It's been exceptionally well built, but it does need a lot of work."

It was also Mr Thomson's second attempt, after he announced plans for a hotel in the building in 2003.