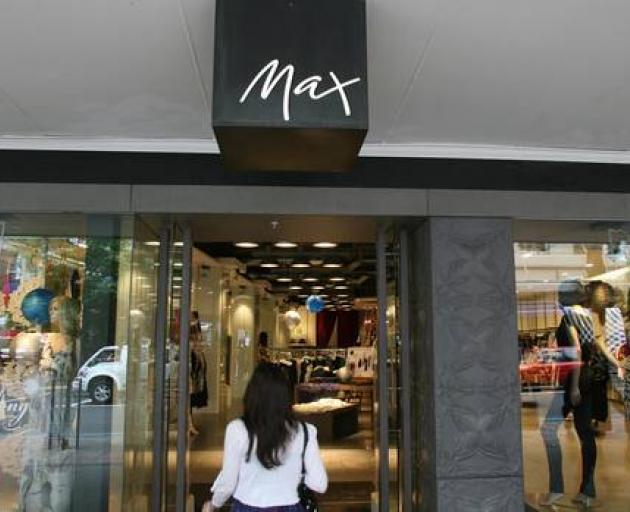 The documents say Max will terminate 17 leases by the end of next month, just over half in Auckland and Christchurch. Photo: NZME
The owner of women's fashion brand Max is planning to close 17 stores after having virtually no revenue during the Covid-19 lockdown.

Max Fashions currently has more than 40 outlets in New Zealand. It won't say how many staff will lose their jobs as a result.

The clothing chain owned by Chris Grieve, Gary Hitchcock and James Whiting is restructuring and is seeking a creditor's compromise so it can keep trading. The company has not paid rent since the end of March.

Max said that separate negotiations with landlords failed and offers varied significantly. "Most only dealt with the immediate lockdown period and not with the potential economic consequences of the unemployment and GDP impact to come. Unfortunately, some landlords were unwilling to provide any concessions at all," the company said in an emailed response to BusinessDesk questions.

The company is requesting a compromise where if enough landlords agree to discount rent any others will be forced to do so as well, so that the business doesn't have to go into receivership or liquidation.

"If the landlords approve the proposed formal creditor's compromise, we are confident that we can continue on the exciting journey of rebuilding this iconic brand on the other side of this very difficult but necessary restructure," managing director Jamie Whiting said in a statement.

"We forecast trading to be impacted for some time to come, as a result of the wider economic crisis, reduced consumer confidence and spending, lower foot traffic and disruption of supply chains," he added.

The owner of women's fashion brand Max is proposing to close 17 stores, including its one in Queenstown (above). Photo: Tracey Roxburgh

In the proposal documents, Max said that despite the wage subsidy, it had incurred "considerable losses" due to costs that could not be avoided during the lockdown. Ministry of Social Development data shows the company received $1.7 million for 284 staff.

The documents say Max will terminate 17 leases by the end of next month, just over half in Auckland and Christchurch.

Max said its shareholders don't have the funds to sustain the company through Covid-19 and complete the business transformation it had embarked on since it was purchased from private equity two years ago.

Under the proposal, the directors estimate that if trading goes as forecast, landlords take a cut of about 30-to-40 percent of rent for the 2021 financial year.

Under the deal terms, landlords for most of Max's remaining outlets will receive none of April's rent, and 10 percent of May's rent, as well as May's turnover. From June this year, the clothing company will pay varying rents based on the compromise, until the end of the lease.

The payments that will be made to landlords will be calculated as proportion of the base rent and a percentage of sales.

For some longer leases, the company has agreed to pay a minimum amount from June 2022.

For example, its deal for its shop in The Plaza, Palmerston North would see it pay 20 per cent of its rent plus 10 per cent of its sales to landlord Kiwi Property Holdings. Other landlords affected by this compromise include the owners of malls including Westfield Albany, St Lukes, DressSmart Onehunga's owner Lendlease.

In locations where Max is pulling out completely, the company has said it will only pay a must reduced proportion of rent. It also said it will "gift" landlords the fit-out of the stores.

The company says that its other suppliers have agreed to discounts and deferred payments, and senior management have taken a permanent 30 per cent pay cut.

It says that should the compromise go through, staff will be paid wages as usual.

BNZ is the company's biggest creditor, but it is not clear how much it is owed. The bank has said it will waive loan repayments for a year if the creditors' compromise goes through.

Max's owners also own men's clothing chain Barkers but would not be drawn on that company's performance. The proposal documents indicate that Barkers is a creditor of Max Fashions. The menswear chain has taken $1.5 million in wage subsidies, for 263 staff, Ministry of Social Development figures show.

Max Fashion's most recently available public financial statements were under its previous ownership of Australian private equity firm Catalyst. In the 12 months to June 30, 2018 the company had sales of $50.1 million, and made $2.3 million in profit after tax. Its then chief executive Simon West, who was also a director, was paid $456,000.

McGrath Nicol partner Conor McElhinney, who is acting for Max, said the government's business debt hibernation - BDH - scheme or its rent arbitration scheme did not fit the circumstances the retailer was facing.

"The key flaw with BDH is that all of the debt must still be paid in full in the future, including potentially rent for April and May for example. It only hibernates debt, it does not eliminate debt. BDH also does not work to allow leases to be cancelled and stores closed," McElhinney said.

McElhinney added that the commercial rent arbitration scheme, which was introduced on June 4, did not suit the size of business because Max would have to enter arbitration with more than 30 landlords which was not practical.

Retail is expected to be one of the sectors worst hit by Covid-19 due to the impact of lockdown and the acceleration of wider online shopping trends.

Industry association Retail NZ's most recent Retail Radar report, published June 4, estimated that by May this year 7,500 had already been lost, and its worst-case scenario for the medium term was that up to 17,100 retail businesses may cease trading, equating to 65,000 job losses.

The report had assumed most retailers would not qualify for the wage subsidy extension. On June 5 the government said it would reduce the revenue reduction required to qualify from 50 per cent to 40 per cent.

McGrath Nicol warned in its In Retail Report released today that recent electronic card data suggesting retail spending was down just 2 per cent from a year earlier was just a short term result.

The advisory firm said retail foot traffic data showed inside footfall dropped 16 per cent in the second week of level 2.

Max locations to close if proposal goes through: