By Jacob McSweeny
2 Comments
Dunedin business owners are excited to open their doors, but anxious to see who comes in once the Cabinet decides to move the country to Alert Level 2.

Prime Minister Jacinda Ardern announced at the regular Covid-19 briefing yesterday what Level 2 would look like: no more bubbles, businesses can open, domestic travel is allowed, schools can open, professional sport can resume, and gatherings limited to 100 inside and outside can occur.

There was one new case of Covid-19 announced, but the South has had 19 consecutive days without a case.

Ms Ardern said the Cabinet would decide on Monday when to move to Level 2.

Hospitality had to follow the rule of the three "S" words — customers had to be seated, separated, and served by one person. 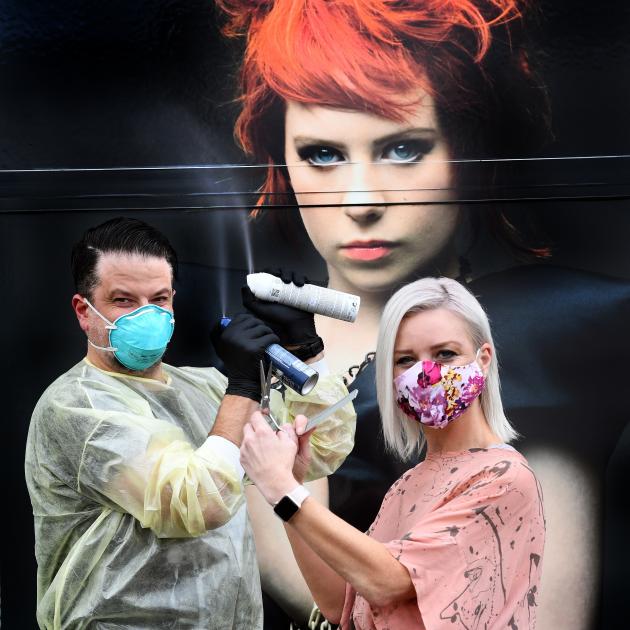 Dunedin hairdressers Karl and Danelle Radel, from Klone, are looking forward to having clients back, but it is not clear to them what the PPE requirements are. PHOTO: STEPHEN JAQUIERY
He said some of the company’s seven Queenstown venues — which employ about 90 staff — were made for standing only.

"Can we get the volume through that we require to make it feasible? I don’t know.

"Some venues that we were planning on opening now won’t open."

Speight’s Ale House operator Mark Scully, of Dunedin, was conflicted as to how the business would look at Level 2.

Mr Scully was sure businesses would adhere to the rules around Level 2 because "anyone who jeopardises that and gets shut down because let’s face it, Level 2 could be months — and if you blew that you could be shut down for several months".

"How we use it, where it can be sourced from and what’s the criteria with it," Mrs Radel said.

"Can I use my home-made mask for the whole day or whole three weeks?"

The pair were "overjoyed" they could open their salon and had about 600 customers on a waiting list for haircuts.

SkyFit24 owner Phil Chaney said his Dunedin gym was in a good place to restart with plenty of hand sanitiser and a way of keeping track of customers — via access cards to enter the gym.

Otago Motel Association president Alex Greenan, who owns Dunedin Palms Motel in High St, said Level 2 would be a good start to getting businesses like his back on their feet.

He was particularly happy to have domestic travel allowed again.

It would take a long time to get confidence back but businesses and the economy were moving in the right direction, he said.

Otago Chamber of Commerce chief executive Dougal McGowan said ideally the country would move to Level 2 next week— "if that’s the earliest we can possibly get it".

He was under no illusions there was more pain ahead.

"Without a doubt, there is going to be further restructuring and redundancies.

"Some of them may be in medium to large businesses, but we know for a lot of small businesses that that’s going to be the case as well."

Otago Southland Employers’ Association chief executive Virginia Nicholls said the announcement domestic travel would be back was a big relief for the businesses linked to it.

"Opening the tourism sector now will help with winter bookings, and will provide some encouragement and hope for these businesses," Ms Nicholls said yesterday.

Ms Ardern also announced sport and recreation could return, including professional sports competitions — but no spectators were allowed.

The Southern District Health Board said it was continuing to plan for the return of more services and their safe operation.

We may be pleased to get a lot of freedoms back but if we learn from the Christchurch and Kaikoura earthquake experience "Don't assume we'll get 'business as usual' any time soon" says Frances Cook. Also the gloss may be off the shiny, clean seating and tables if the place is constantly being sprayed by enthusiastic people bearing disinfectant or hand gel sprays and paper towels.

Why not get with the programme?