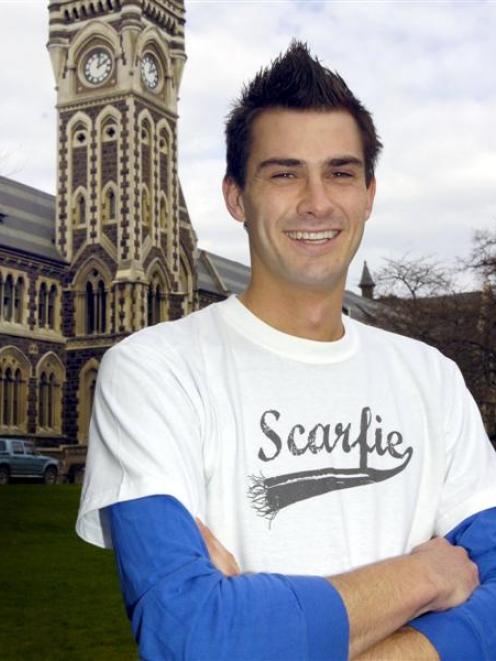 Chris Ashton says the university is Dunedin's greatest asset. Photo by Jane Dawber.
Chris Ashton could not be happier that a clothing venture that started out as a way of earning money while studying has turned into a full-time business.

"I'm just so stoked with what I'm doing at the moment," he says, while charting the rise of Unicity and Konstruct Clothing.

"I wouldn't trade it for anything."

Mr Ashton, together with friends Mark Colley and Tom Wolfenden, started the business in the lounge of their Northeast Valley flat in 2006.

The men had noticed no-one here was producing American-style college clothing and approached the University of Otago for permission to put its name on some hoodies.

The venture got off to a rocky start when they imported 500 hoodies, planning to sell them during Orientation Week, but sold only five.

But a stall at Clubs and Societies proved more successful and soon individual departments were approaching them with orders.

"It was crazy," Mr Ashton says, recalling how the trio's Carlyle St flat was swamped by clothing.

"Our flatmates hated us because we had boxes of hoodies up the hallway and in our rooms and we didn't have a lounge for quite a few months."

Before long, the Unicity brand, which consists of T-shirts and hoodies aimed at students, was joined by Konstruct Clothing, with its customised screenprinting and embroidery.

Mr Ashton says there were times when they considered "packing it in" but a focus on quality and service has paid off and doing the printing themselves reduced costs.

Having links to the campus is also important.

Messrs Colley and Wolfenden are still studying and though Mr Ashton now lives in the upmarket suburb of Maori Hill, he still plays for the University hockey club.

Riot-themed T-shirts produced after the 2007 Castle St riots caused controversy - "I can't imagine us ever doing it again ... We were probably a bit cheeky" - but generally the clothing is designed to be casual, cool and fun, he says.

Much like the Otago student lifestyle it is based on.

"It's a pretty social culture. It attracts a certain type of people who are full of energy and full of life ... There are times it gets out of control and it's fair enough to stamp that sort of thing out.

"But they need to be encouraged to flourish, have fun and a carefree attitude, because ultimately it makes for better people."

The hoodies and T-shirts they sell are imported from China and Central America, including two factories Messrs Ashton and Colley visited last year, and production is now based in the old Ellis Fibre office in Kaikorai Valley Rd.

"There's some pretty long hours [involved]. Quite often we leave around 8pm and some nights, it's well past midnight ... But I quite like the job, to be honest."

Printing and selling hoodies is not Mr Ashton's first foray into business.

While in the sixth form, a Kings High School-Columba College team he was part of won the 2001 Young Enterprise Company of the Year with playing cards featuring Dunedin activities.

But his entrepreneurial spirit took a back seat to studies.

Right through school, Mr Ashton aspired to be a dentist like his father.

"This changed during the summer break before my first year of study, when I finally had a chance to think about things," he says.

He ended up doing a mix of papers in his first year at university and got into second-year law, graduating in 2007.

He is also halfway through a BCom in marketing but has no plans to complete it soon.

Also a director of children's clothing label Cutesi, Mr Ashton says business has tripled in the past three years.

"We're in the middle of the clothing market now in terms of size, whereas we were pretty much unknowns for a year or two."

And he and his friends have big plans.

They intend to take the Unicity brand into shops, expand the range to also target their own graduate age group and attract investors for a new web-based clothing business that will see them "go global".

Although he has probably not earned as much as he would have in law, money is not the driving force for him or his business partners, he says.

"I don't have a huge amount but my quality of life is fantastic ... It's cool to hang out with your mates all day."