‘‘It is a truth universally acknowledged, that a single man in possession of a good fortune, must be in want of a wife.’’

Thus begins one of the greatest love stories in the English language, and thus began my love of Jane Austen. It was balmy summer in 2009, I was 15 years old, and I knew it was a truth universally acknowledged that I was deeply uncool.

My best friend and I had hopped on a ferry across to Ponui Island in the Hauraki Gulf, where we had ahead of us a week of splashing about in the ocean, bible readings, worship sessions, camping in the Biblical wilderness, and learning how to be model young Christians.

I wasn’t too optimistic about becoming a model young Christian — 15 years under the guidance of my Presbyterian minister of a father hadn’t accomplished much. Nevertheless, it was deemed that a Scripture Union Bible Camp would be a Good Thing for me, so away I went.

I actually enjoyed the camp, especially the outdoor activities diving off the pontoon into the cool ocean water, tramping through the bush, and hurling a volleyball at my new mates. It was the evenings, when we had to cluster in our tents for prayer meetings, or head off to the beach for ‘‘quiet times with God’’, that I found difficult. I also felt left out from the other girls as previously mentioned, I wasn’t ‘‘cool’’ I didn’t know how to do my makeup, and no boys fancied me. 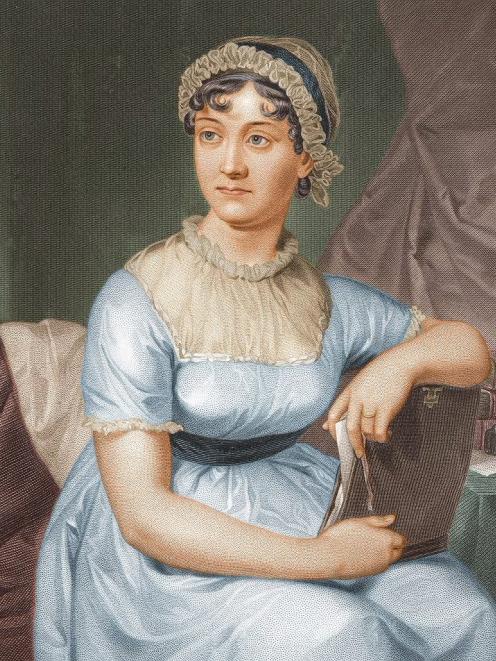 Jane Austen is depicted in this drawing by her sister, Cassandra. Photo: Wikimedia Commons
But I didn’t mind too much, because I had a copy of Pride and Prejudice, stolen from my father’s study, and smuggled into the camp in my sleeping bag. I would hold the book so the title wasn’t visible, and pretend I was reading from the Bible as my camp leader proselytised each evening, lecturing us on how to maintain our purity and refrain from tempting young men.

I would lie on the cool grass in the evenings, and read about Elizabeth Bennet’s infuriating family, her trials and tribulations in finding love, and the dashing Mr Darcy. It was heavenly.

It’s been 207 years since Pride and Prejudice was first published, but Austen’s charm and legacy lives on. Her novels crop up time and time again throughout university literature courses, cited as examples of ‘‘the classic English novel’’. I heard so often of ‘‘Jane’’, mentioned casually by my professors as if they had just bumped into her on campus, that she became something of an invisible classmate, instead of a long-dead 19th century novelist. It often seems as if the world is too saturated by Austen-mania, from the Austen-zombie horrors, to Austen erotica (helped no doubt by Colin Firth’s wet shirt scene in the 1995 BBC P&P adaptation), to Bollywood extravaganzas. But I still love her wholeheartedly.

Jane Austen wasn’t always admired. Ralph Waldow Emerson once said: ‘‘I am at a loss to understand why people hold Miss Austen’s novels at so high a rate, which seem to me vulgar in tone, sterile in artistic invention, imprisoned in their wretched conventions of English society, without genius, wit, or knowledge of the world. Never was life so pinched and narrow.’’

To an extent, I can see where Emerson is coming from, although I do not agree with his vehemence.

Austen’s writing conforms to an admittedly narrow range of themes and characterisations, and rarely does she concern herself with matters concerning anyone who isn’t white, British, and upper-middle class.

Jane’s nephew himself wrote ‘‘She was always careful not to meddle with matters with which she did not thoroughly understand’’. That may be so, but the rigidity of Austen’s limitations is nevertheless frustrating. Religion is infrequently discussed, as is politics, or any deep philosophical matter.

But in another sense, the smallness and realism of her writing is her strength. Austen’s stage might be small, but it is well furnished, beautifully lit, and artfully populated. Her world is a complete and perfect sphere, with all its characters, events and dialogues exquisitely delineated. Yet her writing also shows that some things don’t change: unrequited love, personal slights, familial loyalty, independence, wit and jealousy are still very much part of our lives in the 21st century.

Her writing style is deft and second-nature, populated with natural comparisons, a sly observation of reality, and naturalistic language, with dialogue punctuated by her character’s made-up words, thoughts, quirky linguistic ticks and wildly insensitive observations. She is sly and ironic, layering her writing with romance, comedy, satire, and mystery.

What I love in particular about Austen’s work is the snarky, robust female characters that populate her pages, from the sharp-tongued Elizabeth Bennett to the kind-hearted and faithful Fanny Price. Austen herself was a formidable and admirable young woman, turning down a suitor later in life (a man with money and the means to support her, no less) because she felt no real love towards him. Austen’s novels also illustrate excellent character development, as her young heroines learn their strengths (and failings), and find their voices.

Over time, I’ve wondered which Austen heroine I would be. When I was younger, I flattered myself by thinking I most resembled the witty, beautiful Elizabeth Bennett irresistible to suitors across the land, and the only voice of reason in her chaotic family.

I know now that I’m actually more like Emma annoying, obnoxious, opinionated, and occasionally gifted in matchmaking my friends.

‘‘Let other pens dwell on guilt and misery,’’ writes Austen in Mansfield Park. I shall take Jane’s advice and return to my much-thumbed copy of Persuasion.

If the land of suitors were New Zealand, nothing for it, he would have to be a Remittance Man, or bluff Sam Butler at Erewhon.