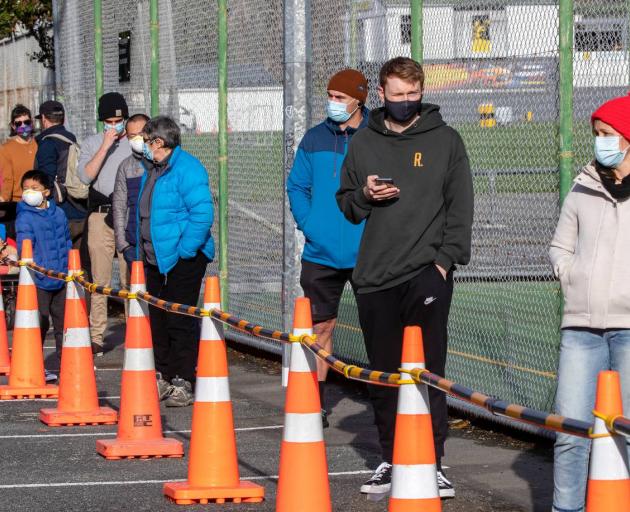 People waiting in line to be tested for Covid-19 at Hataitai Park in Wellington. Photo: NZ Herald
The tools that were used to fight Covid-19 in New Zealand last year are not enough to battle the Delta variant, a top Covid-19 modeller says.

Rodney Jones who provides Covid-19 modelling information to the government is warning that until New Zealand gets more of the population vaccinated, the country will be holding its breath that the more transmissible variant doesn't enter the country.

Wellington is still on high alert after a visitor from Sydney over the weekend later tested positive for Covid-19.

Two days of testing in the capital has yet to return any positive cases in the community but today the first of the crucial 'day five' test results are expected.

We are still learning about the Delta variant, he says.

“It's more transmissible, and as we saw from that CCTV footage from Bondi Junction in Sydney, it can transmit in just incredibly casual contact, being in the same space for 30 seconds.”

Modelling of the Sydney outbreak suggests a high R value, he says.

“The R value that our models generate from this outbreak, even though it's very early days, is much higher than we've seen before.

“So, you can actually see in the data evidence of what the epidemiologists are saying, that this is transmissible, maybe 50 to 200 percent more transmissible, and it creates a really dramatic outbreak from the get go, which is what's happening in Sydney.”

New South Wales is better placed to manage the new variant than New Zealand, he says.

“New South Wales is actually better than us, you have much more use of the use of the Covid apps, restaurants make you check in, taxis make you use it. So, they've been doing a better job, they've got better contract tracing.

“And yet this outbreak is outpacing them, is outrunning them. And so that just tells us that the sorts of tools that were so effective in 2020 are not so effective against the Delta variant.”

Lock-down decisions have to be made far quicker to contain the new variant, he says, and if the Delta variant took hold in New Zealand we would be classing it as a Level 4 outbreak.

“But you have to have the right vaccines. That's the other thing with the Delta variant, you need these mRNA vaccines, you need the Pfizer.”

Until we get new vaccine supplies we are “holding our breath,” he says.

But he doesn’t believe the bubble between New Zealand and Australia needs a rethink as it is working well.

“I think the system's working and we just need to get through the next four months but of that four months we may be closed to Sydney for another month.”

Mr Jones should try his hand at science fiction.
All of his assertions appear to be guesswork at lacking in any evidential data. It's not really good enough.
The article claims he provides modelling information to the govt. Does he? Who is he employed by? who designed the modelling software he uses? Who did the validation work on the effectiveness of the modelling? What are Mr Jones' qualifications and position? How do we know he is not the the office boy in some undergraduate laboratory?
Also how does he know the NSW's track and trace is better than ours? He cites restaurants and taxis requiring sign in, do they? It seems to me the Aussies are losing control of the situation because they have become complacent, more complacent than us kiwis and God knows we are bad enough. Also, their politicians routinely disregard scientific advice and make political decisions about reducing restrictions. That's why they've had so many outbreaks.
Mr Jones needs to back up his scaremongering speculations and assertions with evidence if he expects to be taken seriously.

This strikes me as utter tosh. How can ANY virus spread, no matter how transmittable, if we are all at home not interacting? No problem with the vaccine but to state blindingly obvious truth as false smacks of politicising a matter that should NOT be politicised.