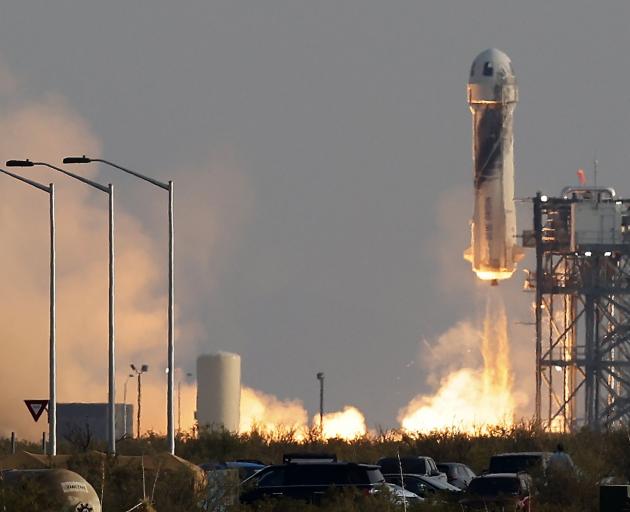 Billionaire businessman Jeff Bezos is launched, with three crew members, aboard Blue Origin’s New Shepard rocket. PHOTO: REUTERS
When the world has so many things to worry about, is the notion of billionaires flying to the edge of space one that is really meant to fill us with admiration rather than disgust?

Space is, after all, “the final frontier”, as so eloquently voiced by Captain James T. Kirk at the start of each episode of the earliest Star Trek.

Despite the frenzied aspirations of Jeff Bezos and Richard Branson to ride their own personal rockets into the lowest reaches of space, and be first to do so, somebody needs to remind them it is no longer uncharted territory.

They are by no means explorers or pioneers. Plenty of others have been up there before, and on missions far more valuable to humanity than the Virgin Galactic and Blue Origin expeditions.

It is more likely that Mr Bezos and Mr Branson do not care whether we consider them galactic leaders or indeed what we think about their space antics. If that is the case, then bang go any claims to have done it to inspire the billions of us still struggling with that awkward gravity thing on Earth.

When you stand on a clear night looking up at the black sky punctured by innumerable pricks of light, do we really need another two? When you think what a mess we have managed to make of Earth, should we really be taking our destructive roadshow into space?

Do we want branches of Amazon set up in the Solar System? When Earth-bound tourism is going to struggle for years due to Covid-19, is space tourism really going to be a goer? Is it a good idea to have rich folk zipping around up there in tin cans?

The debate rolls on about whether Commander Bezos and Commander Branson are actually astronauts.

The Karman line, 100km up, is an internationally recognised boundary between the top of the atmosphere and the start of space. Mr Branson’s Virgin Galactic did not make it, reaching an altitude of about 86km during a 59-minute flight, while Mr Bezos’ Blue Origin did, rising to 107km above the surface in about 10 minutes.

The Federal Aviation Administration has now declared that neither are astronauts. On the same day as Mr Bezos’ flight, it introduced new rules “in order to maintain the prestige of commercial space astronaut wings”, which, among other things, means those who pay for orbital or suborbital space flights are ineligible.

The FAA also says flight crew members must be employed by an FAA-certified organisation, including Nasa and the United States military, and that they must be involved in activities during the flight that are “essential to public safety or contributed to human space-flight safety”.

Before the journey, Mr Branson told the BBC he had wanted to go into space “since I was a kid”. He wanted to help hundreds of thousands of people in the next 100 years go to space to “look back at our beautiful Earth and come home and work very hard to try to do magic to it to look after it”.

Mr Bezos similarly posted on Instagram: “Ever since I was 5 years old, I’ve dreamed of travelling to space.”

Haven’t we all? But not content with his big-headed mission, Mr Bezos made ill-advised, arrogant comments on his return, thanking Amazon customers and staff for effectively paying for the trip.

The development costs of both missions run into billions of US dollars, an obscene amount of money. Perhaps instead of these gross vanity projects, that could have gone into making and distributing Covid-19 vaccines for African and South American countries and other nations desperately in need of them now.

The world may even have forgiven the two billionaires for trademarking the vaccines the Bezos Shot and the Branson Shot.

Space is unimaginably vast, bordering on the infinite. It’s cold, dark, a vacuum, and soundless.

Actually, perhaps it isn’t such a bad place for egotistical billionaires after all?

You are right, their selfish behaviour is disgusting. The world is facing multiple crisis and yet these clowns use their wealth and media attention for personal gain only. Just this week a report supported by over 14,000 scientists was released warning of the ‘overexploitation of the Earth’ with many of its ‘vital signs’ deteriorating to record levels.
Levels of atmospheric CO2 and methane hit all-time highs in 2021.
All-time low levels of ice mass and glaciers are melting 31 percent faster than they did just 15 years ago.
Ocean heat and global sea levels set new records since 2019, and the annual loss rate of the Brazilian Amazon reached a 12-year high in 2020.
Forest degradation linked to fire, drought and logging was causing parts of the Brazilian Amazon to now act as a source of carbon, rather than absorb the gas from the atmosphere.
Livestock such as cows and sheep are now at record levels, numbering more than four billion and with a mass exceeding that of all humans and wild land mammals combined, the authors said.
They call for the elimination of fossil fuels and air pollutants like soot and methane, a switch to mostly plant-based diets and a more sustainable economy.

The billionaires need to watch Aliens. The scary critter is hiding on board, and when it pops out in the tiny tin can, there will be nowhere to hide.

What a bitter editorial, and so ill-informed as well. Blue Origin developed hydrogen technology, so the only emissions from their rockets are water vapour, and the rockets can be reused. With emission free reusable rockets the satellites that we all use for maps and GPS and watching the Olympics and communication are much less damaging to the environment. Bezos has also invested strongly in the amazing new Rivian pickups that make current diesel pickups look like they have horse and cart technology (and are currently being tested right here in Otago). He recently gave hundreds of millions to foodbanks, and has a $10 billion environment fund that gives to a wide range of environmental organisations. Branson is also giving $3 billion to environmental causes, in addition to the dozens of charities he gives million to. And Bezos and Gates are funding new electric planes that use hydrogen generators, so like the rocket, the only emissions are water vapour. Perhaps the ODT could take a more intelligent look at what is behind these space projects, instead of resorting to a shallow tabloid-style hatchet job.

Blue Origin (New Shepard) did emit large quantities of pollutants – NOx and water vapor – that deplete ozone in the layer that protects us from harmful UV radiation. The water vapor that Blue Origin emits also forms clouds in the upper atmosphere that alter climate. This effect was noted by Toohey and atmospheric scientist Martin Ross in a 2019 paper where they warn "water vapor emissions from individual launches can notably impact the mesosphere and ionosphere" – the two atmospheric layers closest to the edge of space. A study from 2010 found that the soot released by 1,000 space tourism flights could warm Antarctica by nearly 1 degree Celsius.
The effects on the environment will differ depending on factors like the fuel they use, the energy required to manufacture that fuel, and where they’re headed. While there is a valid argument for space technology to help the planets future, I can see only negative impacts from these joy-rides.

Pat please do your research!

The Blue Origin (New Shepard) did NOT emit large quantities of any pollutants. It burnt hydrogen with oxygen and created water only vapour, no soot and no NOx. Water vapour has NO impact on the ozone layer.

I have no idea where you got the idea of large quantities of nitrogen oxides from?!

The author of the 2010 study you quote said of Bezos's rocket "But New Shephard's engine doesn't produce much in the way of particulates", Toohey said. "It might be among the cleanest of the fuels in that context." Also as the rocket shut of it's engines at a relatively low altitude, virtually nothing - even water vapour - gets high enough to stay up there.

It would be hard to find anyone who is dedicating more to environmental issues than Bezos, especially since he gave $10b (billion with a b) to environmental issues and organizations last year. With the exception of his ex-wife (who gave away $5.7b) that's more than the next 50 biggest donors put together. He's also resigned from Amazon to concentrate solely on environmental issues. He's sunk big money into electric cars and planes, and ordered 100,000 electric delivery vans for Amazon.