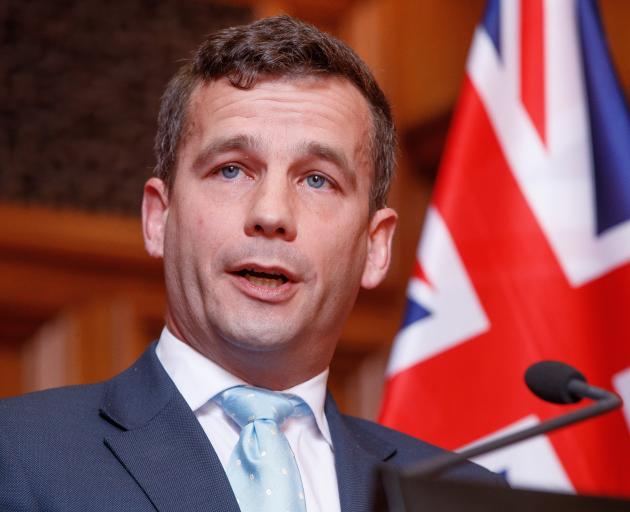 David Seymour. PHOTO: GETTY IMAGES
If last week’s political polls were the result of the 2020 election, Act New Zealand’s Taieri candidate Robert Andrews — sitting at 20 on the party list — might well have become a member of Parliament.

While Labour’s historic MMP era majority government was undoubtedly the main talking point of that election, the rising from the ashes of Act ran it a close second.

There are many reasons why Act might have appealed to people last year: disillusion of conservative voters with the performance of National, the charismatic performance of party leader David Seymour, and the party’s careful positioning of itself in alignment with sector interests such as the gun lobby and farmers.

Its 7% of the party vote meant Mr Seymour, a lone voice in the debating chamber the previous session, had eight colleagues join him.

Some still perceive Act to be a one-man band, but a glance at Hansard suggests otherwise.

While some Act backbenchers have contributed less in the House than others, several of its new MPs have spoken as much, if not more often, than some of Labour’s new backbenchers, despite Act being entitled to far fewer calls than the governing party.

Mr Seymour often defers to his deputy Brooke van Velden to allow her to gain experience in the debating chamber, and she has repaid that faith with polished performances and some decent hits on the Government.

It is debatable how much of this actually registers with the general public, but what is important is that predictions Mr Seymour’s new colleagues would be loose canons has been wide of the mark.

Act has assiduously attempted to position itself as the leading Opposition party, a canny tactic as it makes National seem small when it has to reassert its claim to that mantle.

It has also made a virtue of its willingness to be constructive; it has given the Government its dues on some issues while forensically questioning others, most notably Covid-19.

Mr Seymour is fond of claiming that the pandemic response has improved because of the Government belatedly adopting Act policy, and there enough of a grain of truth to that claim for it to bolster perceptions of Act.

The next election is far too far away for current polling to be an accurate indicator of how 2023 will turn out, but recent trends should have National and Labour strategists highly concerned.

A 16% rating, as Act just reached in the Newshub-Reid Research poll, suggests that Mr Seymour is gaining support from the right and from right-leaning voters who swung left in last year’s landslide, but also potentially from the centre left as well.

Should Act continue its disciplined performance, it has the potential to play a pivotal role not just in the next two years but perhaps beyond.

The most disheartening thing about the All Blacks’ record defeat by the French on Sunday morning was that it came as little surprise.

The battering the national rugby team received from Ireland the previous week was a warning all was not well, and the Parisian pounding confirmed that.

Constant chopping and changing by selectors give the impression they, and the players, have no idea what the All Blacks’ strongest line-up is.

Questions abound about who should make up the loose forward trio, neither of the glamour first fives have shone on this European tour, and the various combination of midfield backs have lacked ideas in attack and starch in defence.

The All Blacks face France on September 8, 2023 in the opening match of the next World Cup, a date which after Sunday might now be viewed with trepidation instead of optimism.

Journalist Andrea Vance wrote last week that Co-Governance is at the core of the Labour Government's policy programme. ACT is opposing this policy direction and is doing well out of it per the poles. David Seymour appears to have a set of well thought through principles and doesn't bend with the political wind.

That is the one thing that bothers me about David Seymour. He, and he alone is the spokesman for ACT. There are 10 ACT mps all sucking in a large salary courtesy of the NZ taxpayer but we never hear from any of them.
Why won’t Mr Seymour allocate them portfolios and let them speak in public. Could it be that Mr Seymour has grown to understand that he has no one in his caucus who has the wherewithal to actually take responsibility.
When you look at them as a group they do appear to be an odd group of malcontents and conspiracy nuts.
It worries me, Seymour is intelligent and competent, rather than not bending with the political wind, he has shown himself to be a master of the craft.
Yet he appears to stand alone without support in the house. Who are his 9 anonymous colleagues and what dangers to our society do they represent?