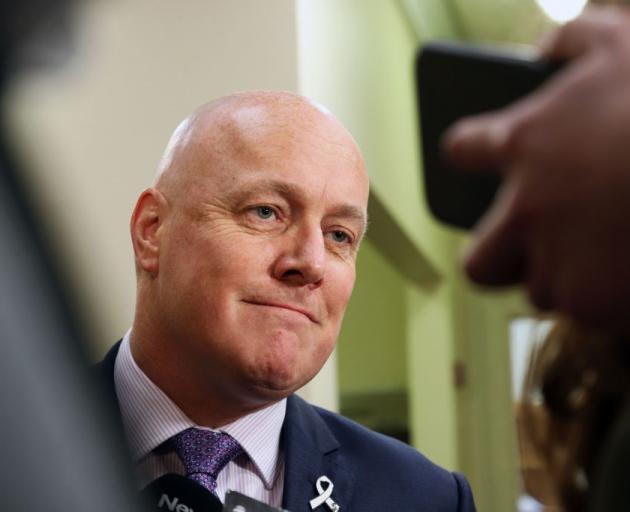 The former chief executive of Air New Zealand became the party’s chief pilot yesterday afternoon on the vote of his caucus colleagues.

Several hours earlier, past leader Simon Bridges trimmed his ambitions and pulled out of the contest, saying on Twitter he was happy to back Mr Luxon. "He will make a brilliant National leader and prime minister," Mr Bridges tweeted.

The turbulent ride of the last 18 months has taken its toll on National voters, on MPs and on the party as a whole. Everyone will be hoping the advent of a new leadership, and especially the departure of the toxic brand of politics increasingly displayed by former leader Judith Collins, mark a significant turning point in fortunes.

Mr Luxon, the MP for Botany, and newly chosen deputy leader, Wellington-based list MP Nicola Willis, will be the bearers of the "new National Party that New Zealand needs", according to a media release issued by Mr Luxon within minutes of his ascent to the top.

Has National finally struck on a combination that inspires Kiwis, has a good chance of longevity, and contains that "certain something" necessary for success? Politics, as we all know, can be a fickle beast, and things can unravel quickly.

The media release from Mr Luxon also promises "a government of action — not rhetoric". If that comes about it will be a refreshing change from the efforts of many previous governments.

It is also quite a dig at Prime Minister Jacinda Ardern and her Labour Government, which is well known for its masterful spin, obfuscation and lack of transparency when it suits.

Mr Luxon’s appointment will be sending a frisson of concern through the Labour camp. There now appears to be a formidable Leader of the Opposition to deal with, one with confidence, who seems likeable and with the common touch, and who has that hard-to-define quality of charisma.

However, National will need to be careful that it doesn’t get carried away with the whole charismatic thing or with thinking Mr Luxon is somehow the next messiah. He is, after all, just another MP.

There will also be residual concerns among some of the National caucus, even if they remain unvoiced, about Mr Luxon’s mateship with ex- National prime minister Sir John Key, a driving force propelling him towards the leadership from day one in Parliament.

Former United Future leader and cabinet minister Peter Dunne hit the nail on the head with his comment that National had to make sure it wasn’t overwhelmed with nostalgia for the Key days.

"You can never go back and can never do the same thing again. Some of them see Luxon as their salvation for that reason. They may well be
disappointed."

Talking to media, Mr Luxon assured the country he was not John Key. He said the 33 members of the National caucus were ready and able to take on their portfolio counterparts on the Government benches.

Mr Luxon becomes leader only 409 days after first being elected. While experienced as a manager and team leader, he needs to prove himself immediately, show he has the caucus wannabes under control and present positive alternatives when criticising the Government.

It’s too early to say for sure it is. But there does seem to be a palpable sense that National has stepped up a few levels as a credible alternative to the Labour Government.

The right wing media are soo happy at the mo. They have got what they wished for finally.
(1) The Natz have no depth behind the new inexperienced leader. Woodhouse, Bayly, Simpson, Brown, Goldsmith, Bishop are all a liability,
(2) They now need to select good moral & capable candidates and end the old boys network.
(3) They have got to hide from the voters the underhand things they will do once they get in = increase the pension age, get rid of the winter power subsidy, abolish rail, privatise hospitals, close schools, no strikes, freeze on wage increases, abolish work conditions, cut back on govt staff like the police, probably privatise water, increase immigration again and allow many covid deaths to appease their small business voters.
Sits back with popcorn and waits . . .

I'm still trying to find the right wing media in NZ. Most will fall over if they lean any further left.

I'm struggling to take you seriously . . Hosking & his wife, Soper & his wife, Royal NZ Herald just for starters. There was a list circulated earlier this year & it was a confirmed 65-15- with 20% unsure. MIT in Auckland did a survey before last election and found an 80% favour in publicity towards the right.

Collins was their third choice as leader, but they haven't reached the bottom of the barrel. Let's give our Fourth Choice Team a try they cry.
The Nationals have one problem, they consistently fail to select capable and competent candidates.

Luxon hit the nail on the head. Ardern aka the Queen of Spin has no depth in cabinet and has proved to be all talk and no action. Not surprising given labours lack of talent and lack of real life experience. Hopefully we now have opposition parties who will be able to clear up the mesd Ardern will br leaving.

Labours strength currently is in some excellent cabinet ministers. You probably forgot how O'Connor scored the big UK deal,
As for the mess, the current govt has made inroads into the 9 long years of neglect (or did you miss that?).
Now as clearly you have been stuck in MIQ, lets take a look at this might Nat lineup of yours (and I watch Parliament TV regularly so not just going off the media lie you) . . .
Collins & Brownlee will be gone, Goldsmith (is good with figures eh), Bridges (he was popular eh), McClay (all talk), Bishop (a loose canon who gets his facts wrong), Upston (all talk), Simpson (gap filler), Woodhouse (dangerous), Dean (history), Mitchell (OK), Bayly (will need to be woken up), Pugh (yawn), Kuriger (Ag spokesperson cos there no farmers there), Doocey (always having to be corrected), Simeon Brown (read his dangerous right wing web posts will ya), Penny Simmonds (poor performer), Muller (he's good), and yes the best is Reti.
Now once that lot get in = schools be closed, hospitals be privatised, railways closed, working conditions eroded again, pension age increase, winter power payment gone, and borders open to the world.
Yup you are on the button