Dunedin test will be a 'highlight'

World Cup boss Martin Snedden says this Saturday night in Dunedin will be a special moment for the whole tournament, and the city will benefit from the new stadium for years to come. 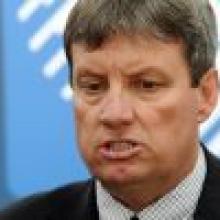 Snedden fronted a World Cup press conference in Auckland yesterday, and two days out from the start of the tournament, was in a confident and positive mood.

"I'm feeling relaxed about the whole thing. There are some issues but in terms of seriousness you would rate [them] between one and three out of 10, and most of them do not come anywhere near me. There is nothing that I am worried about," he said.

Snedden, who is chief executive of Rugby New Zealand 2011, the organisation running the tournament, will be at Eden Park tomorrow night for the opening ceremony and the game between the All Blacks and Tonga.

He will then fly south on Saturday to attend the match between England and Argentina at Otago Stadium.

"One of the highlights will be Saturday night in Dunedin. That will be one of the really special moments of Rugby World Cup in New Zealand.

"I have been to it a dozen times in the past three years and I admire the people down there who put themselves out on a limb in the community to support it.

"I know it is a decision that has not been entirely backed by the community. I know the financial imposition it puts on the community. But is has been a wise decision for the community and will pay dividends as the years go by."

There are fewer than 1000 tickets to sell for the game on Saturday night and Snedden was confident it would be a sell-out, as ticket sales had picked up over the past few days.

He said the only game of the four matches in Dunedin which was struggling to sell was the match between England and Georgia on September 18.

That game had been shifted from Christchurch and was behind the 8-ball in terms of tickets sold, but Snedden hoped sales would pick up as the tickets were relatively cheap and students would buy them.

Snedden was bullish about getting a total sell-out across the country.

"We now effectively have got to do $22 million of tickets in the next 45 days. The intensity of ticket-buying is just snowballing and there is no reason to think that will not stop."

About 1000 tickets remain for tomorrow night's opening game of the tournament.

He believed the welcomes for teams at airports and civic receptions were building momentum for the tournament and admitted the interest had caught him unawares.

"It did surprise me but it was not something I had been thinking about. I have been focusing more on the tournament but really, it has been great."

The welcomes had shown that New Zealanders were becoming more aware that the whole tournament was not centred around the All Blacks winning the Webb Ellis Cup.

"Deep down, I think we all want them to win. And absolutely I want them to win. But the tournament is No 1 for me. That is my job. Graham Henry would say that is not his job. His job is to get the All Blacks to win."

The aim of the appeal was to restore the rugby infrastructure in Christchurch.