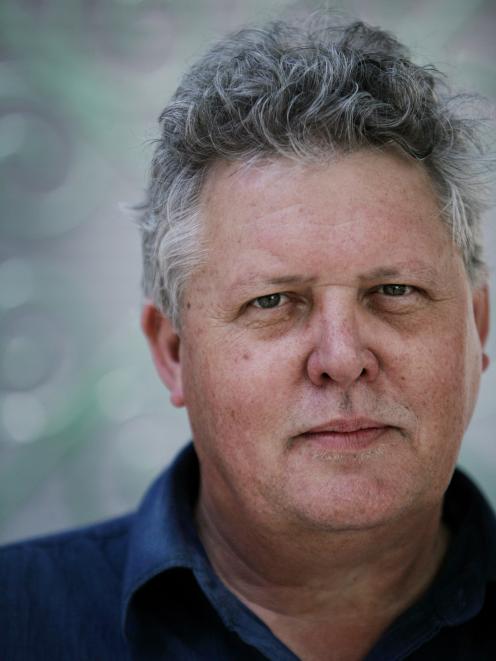 Stephen Daisley, the Western Australia-based author who is heading this way to talk about his work, says he is no great public speaker.

He would rather hide away in a shed in his backyard, where he can go about his quiet business of writing.

Still, he might have to get used to the idea of oratory, given that his novel Coming Rain  won the Ockham New Zealand Book Awards back in May.

The grand prize included  a cheque for $50,000, which went some way to softening the blow of the many rejection letters he has received from publishers over the years.

Daisley is likely to discuss his Ockham win at a public address tomorrow.

Titled "In conversation with Owen Marshall", it is part of the Dunedin Writers & Readers Festival Winter Series at Dunedin Public Art Gallery.

And despite his preference for words written, he is welcoming the chance to share a few with Marshall, whom he describes as "a boyhood hero".

Actually, the New Zealand-born Daisley has more than few literary inspirations, from James K. Baxter, Janet Frame, Keri Hume and Witi Ihimaera to the great American writers (among them Hemingway, Steinbeck and Beckett).

In fact, he quotes the latter as he reflects on his own path to being published: "As Samuel Beckett once said, ‘I just began to fail a bit better’.

"I had heaps of rejections. In fact, a number of publishers didn’t even bother to reply. However, eventually, at the age of 55, my first book, Traitor, was accepted [by Melbourne-based Text Publishing]."

"I kept writing and failing. I was useless, but I kept at it and got better."

Traitor won the 2011 Australian Prime Minister’s Literary Award and fetched strong reviews for its nuanced depiction of a soldier in World War 1 who deserts his military post after forging an unlikely friendship with a would-be Turkish foe.

Daisley sets his second novel in Western Australia, where he has lived for more than three decades with his wife and their five children.

Coming Rain depicts the relationship between a young shearer, Lew, and his older companion, Painter, who took him in as a boy.

As the pair start a new shearing contract, they face a future thrown askew by Lew’s affection for the station owner’s daughter.

Daisley writes of the harshness of nature, man’s brutality and bruised friendships, and peels back the layers of the restless, roamer stereotype.

"That tension between the man seeking solitude and the answers solitude might give him are dealt with in Traitor and again in Coming Rain, which is about that nomadic life.

"There is the older man, Painter, who is a bigot, a misogynist and alcoholic, but he is also brave and kind. He makes his surrogate son, Lew, his first pair of  shoes and cooks for him."

Among the various conversations within Coming Rain, Painter tells Lew about a farmer who used to let his children raise pet sheep only for the animals to end up as dinner on Christmas Day.

Attached is the quote, "don’t get too attached to the meat on the table" which reinforces Daisley’s observations of brutality and  necessity.

Yet Daisley doesn’t juxtapose these ideas.

Rather he presents them as part of the same continuum, on which seemingly random acts of violence are as cathartic as the drought-breaking rain from which the novel takes its title.

"That’s exactly what I was striving to get," he agrees.

• Asked if he might be a fan of the great Australian painter Russell Drysdale, who captured humanity and barrenness in equal measure, Daisley barely pauses: "Aren’t you a clever bugger. You are the first person who has ever asked me that question.

"Yeah, I’m a big fan, That’s where the name Painter comes from. It’s also the inspiration for Drysdale Downs, the place where the shearers go and work."

Daisley knows a fair bit about shearing. Born in 1955, he grew up in the small North Island town of Raetihi, near Ohakune.

On leaving school, he worked in shearing gangs which roamed from Taranaki to Central Otago.

He also spent four years in the New Zealand Army in the early ’70s, before heading to Australia, where he worked on cattle and sheep stations, oil and gas construction sites and as a truckie and bartender, among other jobs.

Asked if his novels are thus a result of the oft-used advice "write what you know", Daisley agrees it does make for a good starting point, yet he has learned more important processes.

"When I’m writing — and I’m not trying to get too metaphysical here — I try to get out of the way of myself. It’s like when I was learning to shear and was told, ‘let the handpiece do the work’. It took me about 20 years to get to that point."

The first person in his family to go to university, Daisley made the leap after he was laid off from a factory job in Western Australia in the late ’80s.

He studied philosophy and literature.

One of his lecturers was Australian writer Gail Jones, whose work has been shortlisted for the Man Booker and Orange prizes.

"I urged her to tell me the truth about my writing, that I was big boy and could handle it. I remember her saying something that is pretty relevant to anyone in the arts. She said, ‘there’s nothing worse than false praise’. She also said she thought I was coming from a real place.

"I’ve been asked several times if being a New Zealander informs my work and I think it does. As a shearer, you’d never tell people how many sheep you could shear. You’d just show the tally book at the end of the day."

Daisley, who says Coming Rain is also a meditation on fathers and sons, has another tale to tell.

"A while back I rang my dad on Father’s Day. He answered, ‘gidday boy, what’s happening?’.

"I said, ‘I love you Dad.’ Then there was this silence on the phone before he replied, ‘Did you hear Canterbury won the football mate?’.

"We never talked about love again. That sort of sums up the place I came out of."