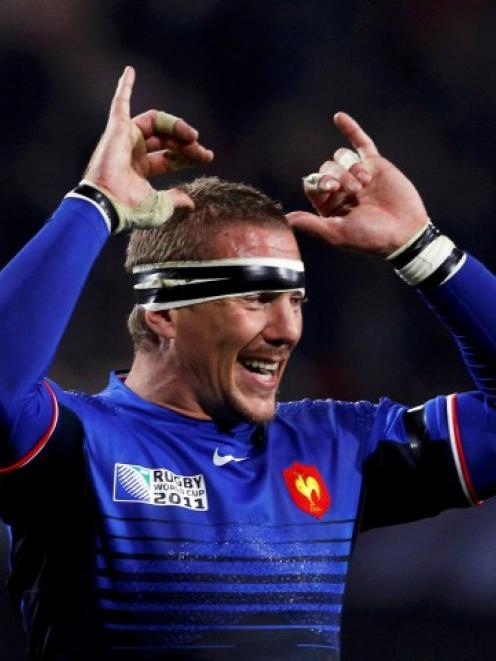 Loose forward Imanol Harinordoquy comes back into the French starting line-up for their quarterfinal match against England in Auckland on Saturday. Photo: REUTERS/David Gray
France have brought Nicolas Mas and Imanol Harinordoquy into their team for the Rugby World Cup quarterfinal against England in the only changes to the starting line-up from last week's loss to Tonga.

Coach Marc Lievremont named the experienced forwards in his side but the backline, which had a disappointing game in the 19-14 loss to the Pacific islanders, is unchanged for Saturday's match at Eden Park.

"The backs did not play well against Tonga but they've trained well and so I have decided to give them another chance," Lievremont told a news conference.

"The gameplan is not so important in this match but what is vital is that we finally get going."

Tighthead prop Mas returns to the pack after missing three pool matches with a hamstring injury, while experienced loose forward Harinordoquy comes into the starting line-up at number eight in place of Raphael Lakafia.

Lakafia is dropped from the matchday squad altogether with Louis Picamoles taking Harinordoquy's place on the bench in one of two changes to the replacements.

"Stability is important but Mas is now available again and Imanol had a couple of good runs in the last match and accepted his new status in good spirit," Lievremont said.

"Experience is important and can help the team ... (and) Picamoles can have a powerful impact from the bench."

Captain Thierry Dusautoir and centre Aurelien Rougerie both have shoulder problems and did not train on Tuesday but are expected to be fit for Saturday, the coach said.

Centre Fabrice Estebanez, who featured in the matchday squad for all four of France's pool games, was not available for selection after being banned for three weeks for a dangerous tackle in the 19-14 loss to Tonga.

His place on the bench goes to experienced Perpignan centre David Marty.

Morgan Parra, who started the campaign in his more usual scrumhalf position, retains the starting flyhalf spot for the third successive match after defeats to hosts New Zealand and Tonga.

Parra said he was trying to block out the controversy over his selection in place of Francois Trinh-Duc for his third start in the number 10 shirt at any level for the last two years.

"I'm just focusing on the task ahead," he said.